What happens when a city bans law-abiding citizens from owning firearms?

Well, to answer that question all you have to do is look at the city of Chicago.

Chicago is one of the most anti-gun cities in America and severely restricts it’s law abiding citizens from owning self-defense weapons. Despite the fact that the city has pretty much banned citizens from owning guns, it has one of the highest crime rates in the country. Things are so bad that earlier this week 25 people were gunned down in one night on the streets of Chicago. 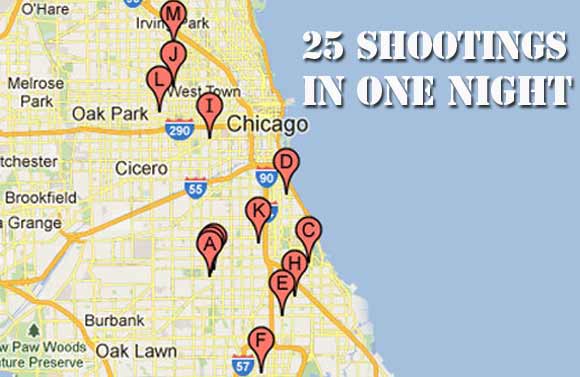 More than two dozen people, including a 6-year old girl, were shot in one night throughout the city.


How much longer can politicians push the lie that they’re trying to protect the public?

One of the arguments you often hear from those who are against gun ownership, is that there’s an epidemic of people dying from gun violence due to the lack of gun control. You often hear them use buzz words like “high-powered assault weapons” “cop killers” or “large capacity clips” to scare the public into thinking we need more gun laws. But if these gun laws work, why is the city of Chicago starting to look like a war zone?

If gun bans actually protected the public, cities like Chicago should be utopias where crime has been wiped out and everyone skips through the streets giving each other high fives. But obviously that isn’t happening. Chicago has some of the most draconian gun laws on the books, yet the average citizens put his life on the line by just walking out the door in Chicago.