Thousands of MRAP vehicles for homeland operations, Billions of Rounds of Ammo, a fleet of Predator B Drones that will be deployed throughout the United States, and now Armed TSA Agents?

What exactly is DHS Preparing for? 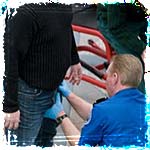 In the latest escalation of the Department of Homeland Security’s lust for weaponry, it looks like the Transportation Security Agency is being prepared for their chance to get in on the action. According to a solicitation posted to the FedBizOpps website yesterday, DHS is looking for a firing range to train TSA workers.

That’s right; the agency that has been groping crippled children, harassing old ladies, and expanding into bus and train stations is now going to be armed – because that’s just what we need, a bunch of uneducated people waving guns around while harassing the public.

Are these really the People we want Armed?