For years the Obama administration has been promising to do everything they can to push gun control behind the scene; now it seems they may have successfully found a way to limit the production of ammunition within the United States, by forcing the shutdown of the last U.S. primary lead smelter through EPA regulations.

In December, the last primary Lead Smelter in the United States will close its doors, making the domestic manufacture of conventional ammunition, from raw ore to finished cartridge, impossible.

The Herculaneum, Missouri Smelter, owned and operated by the Doe Run Company, has been in existence in the same location since 1892. The closure comes after the EPA changed air quality standards in an attempt to shut down the business, which had no way of ever complying with the new standards that are now 10 times tighter than the previous standards. 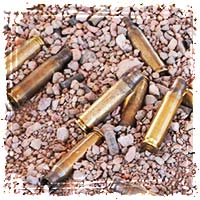 Using environmental regulation in an effort to push gun control is actually not new. In fact, earlier this month California became the first state to ban lead in hunting ammunition. The bill, signed into law by Gov. Jerry Brown, phases out lead bullets and shot by July 2019, with regulations due by July 2015.

While most people weren’t surprised, especially considering the fact that California is one of the most anti-gun states in the country, many thought the law had little chance of passing at a federal level.

But California may have been the testing ground for a federal ban, at least that’s what one of the bills supporters suggested earlier this year:

One of the bills supporters, Kim Delfino of Defenders of Wildlife, said, “There really is no question that lead ammo is a threat… To pass a bill in California would set the stage for this happening throughout the country, the way low-emissions vehicle standards changed the market nationwide.”

In Come the Feds:

The Obama administration knows they don’t have the votes to pass any sort of gun control through Congress, so that’s why they’ve promised to do everything they can to push it from behind the scenes. From passing numerous unconstitutional executive orders, to banning the import of collectible firearms into the U.S., this administration has been very successful at pushing their gun control agenda from behind closed doors.

But with the new push to ban lead, and close all domestic lead smelting, this administration may soon accomplish their gun control agenda through limiting the amount of ammunition that’s produced domestically. To be fair, and to point out how many people on both sides of the political aisle are trying to push backdoor gun control, the original mandate to close the Missouri plant was put into place towards the end of the Bush administration’s last term.