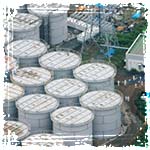 A 5.8-magnitude earthquake has just hit near the damaged Fukushima Daiichi nuclear plant in Japan. The Quake was at a depth of about 13 miles under Fukushima Prefecture, and about 110 miles northeast of Tokyo.

The United States Geological Survey is reporting a 5.3 Magnitude Quake; however, The Japan Meteorological Society issued an alert on the quake at 1:29 EDT, reporting it as a magnitude of 5.8 at a depth of 12.4 miles.

This couldn’t have come at a worse time; as we reported earlier this month, officials at Fukushima admitted that the steel containment tanks used to house the radioactive water from the damaged nuclear power plants were themselves leaking. At least 300 tons of highly radioactive water has already leaked into the Pacific Ocean, and now there is serious concern to the stability of the entire area.

The 2011 disaster caused meltdowns at three of Fukushima Daiichi’s reactors and damaged a fuel cooling pool at another where there are still major concerns over the state of the spent fuel rods. Since that time, huge amounts of radioactive material have leaked into the surrounding area, contaminating the groundwater and making its way into the Pacific Ocean.

In my opinion, this disaster is a danger to the entire world. Not only has the cleanup been horribly mismanaged, but as today’s earthquake shows, the disaster is nowhere near over.

The Damaged Fukushima Daiichi Nuclear Power Plants are located right inside the “Ring of Fire” — an area that receives 90 percent of the world’s earthquakes. With no real plan of action in place, the Japanese officials are struggling to contain what could very soon become a worldwide problem.

We will keep you updated on any further developments.