The Bubonic plague – yes, the black death that killed almost 60% of Europe during the dark ages – has been reported in New Mexico and California.

New Mexico officials are warning residents in the East Mountains and Santa Fe county that the bubonic plague was found in two local dogs. Residents are being advised to keep their dogs and cats away from rodents, as officials fear they could be carrying Black Death-laden fleas. 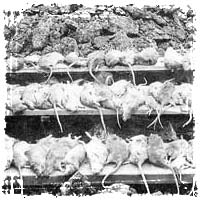 While researchers aren’t 100% sure where the dogs contracted the deadly disease, they are warning that animals like rabbits, chipmunks, and squirrels are the most likely carriers. This means even humans should be careful while hunting in the area, as the Bubonic plague can be contracted through tissues or fluids while handling an animal that is sick or dead from the plague.

At the same time California health officials are warning of increased plague activity in El Dorado County. This has promoted them to issue a warning for residents to stay away from chipmunks and squirrels.

The last time the world seen an outbreak of Bubonic plague, was during the Third Pandemic that started in 1855. This pandemic killed an estimated 12 million people throughout the world. Since 1900, there have only been 999 confirmed or probable Bubonic plague cases in the U.S. Most of the cases have been found in the New Mexico, Arizona and Colorado area and in Nevada, Oregon and California.