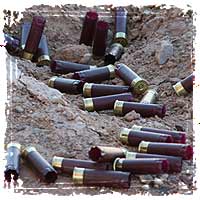 In the latest attack on your second amendment rights, California, who has been trying to enact a bill that will criminalize most of the state’s law abiding gun owners, is now looking to go after bullets through passing environmental regulations against lead ammunition.

California State Assembly Member Anthony Rendon, D-Lakewood, is in the process of finalizing a bill that will ban all lead ammunition in California. The bill, which has the backing of three major environmental groups — Defenders of Wildlife, Audubon California, and the Humane Society of the United States, has a good chance of passing through the State legislator.

If the bill doesn’t pass, the States Fish and Game Commission are threatening to take action and pass their own statewide ban through their environmental regulatory powers.

The tactic is actually nothing new; in fact, the EPA has been pushing for a national ban on lead ammunition for years, which is why we need to keep an eye on what happens here. The anti-gun nuts in California have a good chance of banning bullets through passing these environmental legislation. If that happens, it would make it impossible to buy or shoot most commercially available ammunition.

California the Testing Ground for a Nationwide Ban

The Anti-gunners are keeping a close eye on what happens in California, and some are saying this is the blueprint for a nationwide ban on lead based ammunition. One of the bills supporters, Kim Delfino of Defenders of Wildlife, said, “There really is no question that lead ammo is a threat… To pass a bill in California would set the stage for this happening throughout the country, the way low-emissions vehicle standards changed the market nationwide.”

If you thought it was hard to find ammo now, what do you think will happen when they ban about 95% of the commercially available ammo?