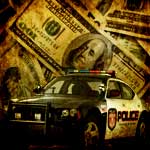 From the FBI circulating memos warning business owners to be on the look out for people paying with cash, to the Feds illegally seizing farmers bank accounts, we’ve highlighted a number of examples of how the government is trying to demonize the use of paper money. But never did we think that something like this could happen so easily in America.

This story should serve as warning to those who carry cash….

A New Jersey man had $22,000 dollars of his hard-earned cash stolen by the Tennessee Police department, and apparently it’s perfectly legal!

George Reby was driving through Tennessee on I40 when he was stopped for speeding. The officer asked him if he was carrying a large amount of cash to which Mr. Reby, thinking he had done nothing wrong, replied that he had around $22,00 in cash. Mr. Reby was on his way to buy a car that he bought on ebay and was using the cash to pay for the transaction.

And here is where the Government Criminals step in….

Although Mr. Reby had committed no crime, was not arrested for a crime or even issued a citation in this case, the Tennessee police department confiscated his money. According to the law in Tennessee, carrying a large amount of cash makes you a suspected drug dealer or terrorist and gives the police department the right to confiscate your money. No Due Process and No Recourse.