One of the biggest takeaways from Ebola showing up in the United States, something that is being completely ignored by most of the media, is the complete breakdown and failure of this country’s emergency preparedness agencies. If you take anything away from this failure, it should be you’re on your own when it comes to protecting yourself from threats.

In the United States, we spend billions upon billions of dollars on emergency preparedness every year, with over $6.6 billion going directly to the CDC to combat disease. With so much money being thrown at emergency preparedness, one would think these agencies would have a plan to deal with something like a pandemic outbreak; they don’t!

With a single case of Ebola showing up in the U.S., we have witnessed the complete breakdown of the entire federal preparedness system.

From DHS and border patrol failing to shutdown air travel during an active epidemic in West Africa, to the CDC’s complete failure to manage a single case of Ebola, no one in government seems to have an actual plan in place to deal with this type of emergency. In fact, day after day the CDC comes out during their daily press conference basically admitting their making it up as they go.

“We could have sent a more robust hospital infection control team and been more hands on with the hospital from Day One about how this should be managed.” From now on, Frieden said, “We will put a team on the ground within hours with some of the world’s leading experts in how to take care of and protect health care workers from Ebola infection,” Frieden said. “I wish we had put a team like this on the ground the day the first patient was diagnosed.”

After this admission, why is no one calling for his immediate resignation? Remember this is the same guy who assured the public that every hospital in the United States was equipped to immediately stop Ebola from spreading – something our nation’s nurses have been warning was never the case.

This is also the same agency that receives $6.6 billion a year in funding. Why did it take a case of Ebola showing up at a U.S. Hospital for them to take action? Where exactly have these billions of dollars gone, because we can be pretty damn sure they didn’t go towards coming up with a plan of action.

Some of the money went to fighting Zombies; I’m not joking; ZOMBIES!

This is something we have actually covered over the last couple of years, and something that CDC director Friedman actually admitted to during a segment on NPR in 2012. Over the last couple of years the CDC has used part of their budget running Zombie Preparedness Drills. I really wish I was joking about this one, but they’ve actually spent your tax dollars on zombie preparedness drills. But wait it gets even better. They not only spent your money on mock drills, but they actually sunk your tax dollars into creating viral social media campaigns about ZOMBIES. 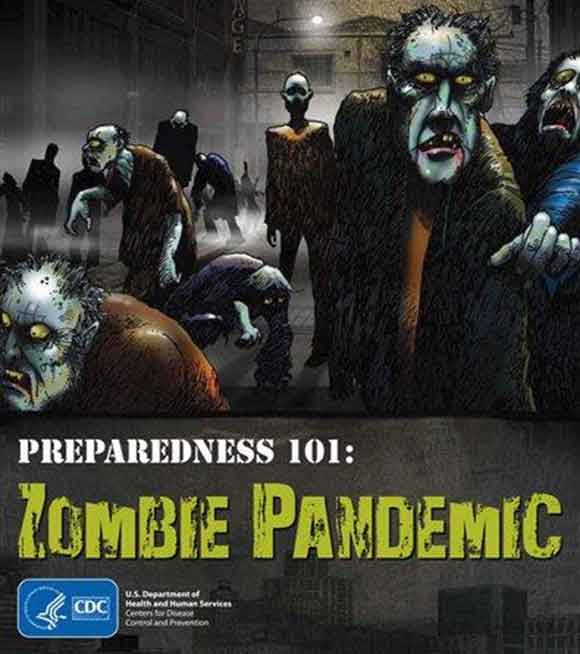 Instead of focusing on real threats like Ebola, MERS, EV-D68, and a myriad of other very real diseases, these idiots choose to focus on zombies. Government bureaucracy at its finest!