The Chicago Police Department has issued a “civil unrest” warning for the city of Chicago after they released footage today of police officers shooting a black criminal who had just stolen a car and tried to run over police officers. 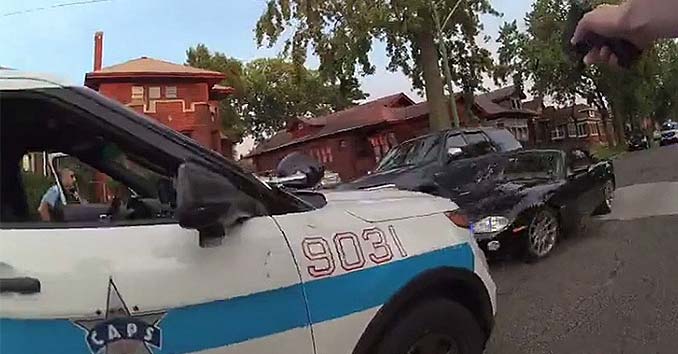 The man, Paul O’Neal, was fatally shot by Chicago Police officers after he tried to kill an officer with his stolen vehicle. Police opened fire on the car as it barreled towards the officers, and then followed in chase after O’Neil fled from the vehicle. O’Neal tried to flee into  a nearby home, and police opened fire on him before he could hurt innocent bystanders in the nearby homes. Activists claim that O’Neil was unarmed when he was shot.

According to police sources, leaders from three West Side Chicago gangs allegedly met to discuss plans to shoot members of the Chicago Police Department in response to the fatal police shooting of Paul O’Neal. The meeting took place on Thursday between leaders from the Vice Lords, Black Disciples, and Four Corner Hustlers, according to an alert issued to department members the day after the meeting.

Black Lives Matters activists, along with the usual street agitators like Jesse Jackson and Al Sharpton, are already planning marches, as the Chicago law enforcement gears up for “civil unrest” and potential violence against cops.

So far this year, the city of Chicago has already seen over 2,400 shootings and 410 homicides, something most Americans are unaware of because these types of crimes are never talked about. It seems the only time black lives matter to the media is when there is an officer-involved shooting.

Chicago is an absolute hellhole, with gang members and criminals roaming the streets and a homicide rate that is higher than New York and Los Angeles combined.

While the mainstream media continues to ignore what’s actually going on in Chicago, instead only focusing on cases that will further inflame the city, the fact is, Chicago has been a war zone for quite some time. In fact, the city is actually more dangerous than the war zones of Afghanistan and Iraq.

An Expose on the Violence in Chicago from Earlier this Year: