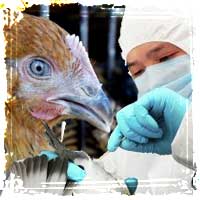 Researchers are keeping a close eye on China’s H7N9 strain of bird flu as it spreads to new regions in China. In the last 24 hours, China has confirmed four new cases of human H7N9 avian influenza, including two in Zhejiang, one in Anhui and the first case in Shandong.

H7N9, which previously only affected avian populations, seems to have made a transition that has some researchers worried. A number of cases are being reported where the individual had no contact with any avian species, causing some to speculate the virus may be morphing into something that could spread among humans.

According to The National Health and Family Planning Commission, a total of 108 H7N9 cases have been reported in China, including 22 that have ended in death.

The World Health Organization (WHO) is denying H7N9 has evolved into something that can be passed through human-to-human transmission, but on April 19th 2013 WHO admitted they are now looking into human to human infections because over half of the infected people had no contact with poultry.

Whether the Chinese H7N9 virus will turn into a pandemic is still not known, but as we talked about earlier this month, it’s only matter of time before we get his with another deadly outbreak. Jason Tetro, a microbiologist with the Emerging Pathogens Research Centre and the Centre for Research on Environmental Microbiology told us, when talking about pandemic threats, “I believe that the world is becoming increasingly more likely to see a major event.  It’s a process that is highly predictable.”

If you haven’t read our article on, “What can you do you do to protect yourself from a pandemic outbreak”, I suggest taking a quick look to see if your prepared to deal with the threat.