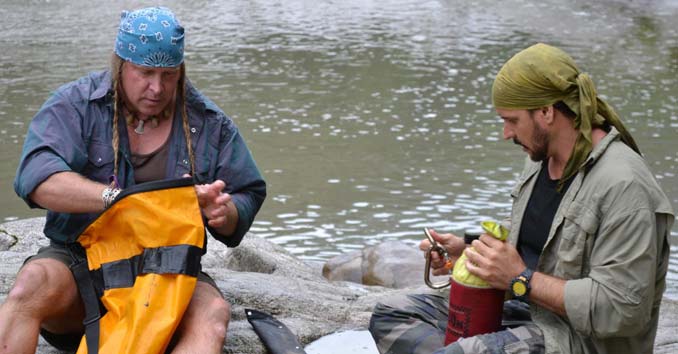 Former “Dual Survival” host Cody Lundin is suing the Discovery Network, claiming the scripted survival show’s producers purposely made him look incompetent and paired him with a problemed soldier who threatened to kill him on multiple occasions.

The trouble came to a head during the filming of the fourth season of “Dual Survival,” after the Discovery Network fired Lundin from the show and then made it seem like the Survivalist could not hack it during the so-called “wilderness survival situations”. But according to Lundin, the show producers may have been putting the crews, and the viewers lives at risk.

“It’s shocking to me that Discovery would treat anyone in this manner,” he wrote. “Programming of this nature must be produced and marketed in a responsible manner with the highest level of regard for the safety and health of the hosts, production personnel, and members of the viewing public. I have shared this message with them many times. Failure to observe this standard could have tragic consequences that, with proper precaution, can be avoided. There can be no compromise when dealing with people’s lives.”

Shortly after he told TV Guide:

“You’re dealing with people who have no experience in my profession who are making a show on survival skills,” Lundin says. “They asked me many, many times to do stupid s–t that I refused to do. ‘Fall into cold water so you can get hypothermic.’ ‘Scale that cliff.’ ‘Can you climb that coconut tree?’ I try not to put out dangerous s–t that’s going to be replicated by someone to their detriment. They hated me for it.”

In the suit against Discovery, Lundin is claiming producers made it look like he was losing it during filming; but Lundin claims the real problem came after co-host Joe Teti waved an ice axe around while threatening to bury Lundin on a mountain in Norway. He also claims that while shooting in Hawaii, Teti threatened to impale him with a spear.

Lundin alleges Teti, a former CIA operative with a disputed military record, said, “You better not blow this for me … I think you know what is going to happen to you,” TMZ reports. Lundin claims Teti showed him pictures of people he killed while in the CIA.

Almost immediately Teti became embroiled in controversy after a number of his former military commanders accused the host of padding his military resume, some going as far as accusing him of lying about his combat record and violating Stolen Valor laws.

According to a number of his former military commanders, Teti has been embellishing and perpetuating falsehoods about his military career.

“He’s an embarrassment to the Regiment,” retired Army Sgt. Maj. George Davenport told the Army Times in October 2014. “Teti was renounced by the Special Forces Association after nearly two dozen Special Forces soldiers accused him of misconduct. “He is no longer a member and cannot rejoin,” retired Army Col. Jack Tobin told the publication.