This Friday, November 1st, food stamp benefits will be cut for 47 million Americans enrolled in the Supplemental Nutrition Assistance Program. The cuts, which will trim about $5 billion from federal food-stamp spending over the coming year, have a number of people worried about how people will respond.

Last week, it was reported that the Department of Homeland Security had spent $80 million dollars on private security forces, in preparation for the food stamp cuts. Now, the CEO of the Country’s largest food bank is warning the food stamp cutbacks may cause riots.

“The fact that they’re going to lose what’s basically an entire week’s worth food, it’s pretty daunting.” … “If you look across the world, riots always begin typically the same way: when people cannot afford to eat food.”

While the first round of cuts is seemingly minimal, Purvis says it amounts to a cutback of “16 meals a month for a family of three.”

Even more cut are coming which could add fuel the fire:

While I think the food stamp program has grown out of control – we currently have over 47 million Americans receiving food stamps – I also believe the cuts could have some major consequences. We have a country of people who have become completely dependent on the Federal Government; once these programs start to make their mandatory cuts, these people are going to be in for a huge wake-up call.

Will there really be Food Stamp Riots? 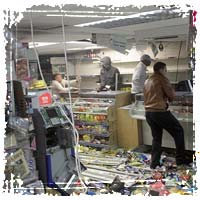 While the cuts may be small, I think we have to remember how easily riots can break out. Like we’ve pointed out in the past, today’s society is so morally bankrupt that it doesn’t take much for them to take to the streets and riot.

Their team wins the Superbowl; let’s riot. The election doesn’t go their way; let’s riot. It’s sad, but I’m afraid we live in a time where a lot of people are just looking for an excuse to commit crimes and cause chaos on the streets. Whether these coming cuts will cause a spike in crime and chaos I’m not really sure; but I am sure the riots and the chaos are both eventually coming.

The country sits at over $17 trillion dollars in debt, with no real way to continue to pay for these welfare programs. At some point the system implodes; when that happens chaos will follow. And you better be Prepared!