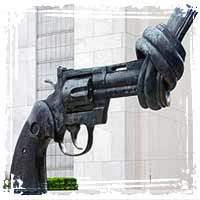 Democrat and Republican Lawmakers in Connecticut reached a deal today to pass some of the most draconian gun laws in the nation. Included in the gun control package is a whole list of regulations that do very little to go after actual criminals and instead seem to target average law-abiding citizens.

Here is a breakdown of some of the measures in the new Connecticut gun control package.

The new state laws will force law-abiding gun owners to register all of their so-called “high capacity” magazines as well as any weapon which is considered an “assault weapon”; it also bans the sale and transfer of any magazines that are capable of carrying more than ten rounds of ammunition.

In what’s probably one of the most ridiculous parts of the Connecticut gun control package, citizens will now be required to show an “ammunition eligibility certificate” too legally be able to buy ammunition in the State. To qualify for the new revocable state issued certificate, a Resident must now pass a national criminal background check.

Under the proposed gun control package, which lawmakers tentatively agreed to today, all state residents will now be required to have a “long gun eligibility certificate” to purchase any rifle or shotgun. In order to qualify for the eligibility certificate, State Residents must submit to being fingerprinted, pass a State run firearms safety training course, and submit to a national criminal background and involuntary commitment /voluntary admission check.

The new gun control package will also add over 160 specifically named firearms to the States list of prohibited firearms. It also classifies any weapon which displays one or more “military characteristics” as an assault weapon, making it illegal in the State of Connecticut. This means something as harmless as simple pistol grip, which in no way makes any firearm more deadly, will now make those firearms illegal.