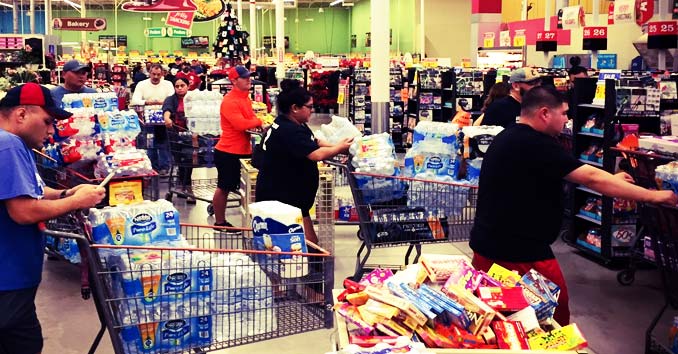 Over 320,000 residents in the city of Corpus Christi, Texas have been told not to use their tap water after two “unknown chemicals” made their way into the city’s water systems.

According to Corpus Christi city officials an unknown chemical substance contaminated the city’s drinking water in what they are calling a “back-flow incident.” Interestingly, we have reported numerous times in the past how susceptible our nation’s water systems are to these back-flow incidents. In one of these reports, we detailed how water officials in Atlanta, Georgia showed how easily terrorists could release chemicals and biological agents into the water system using a typical city fire hydrant, and a process known as backflow.

In an official statement, the city warned residents not to drink, wash, or brush their teeth with any city water. They warned that boiling, freezing, filtering, adding chlorine or other disinfectants, or letting the water stand will not make the water safe.

Part of the statement read:

Late today an unknown chemical substance may have contaminated the City of Corpus Christi drinking water due to a recent back-flow incident in the industrial district. In an abundance of caution and until results can confirm water safety, the City is issuing an avoid tap water usage until further notice. The City is working the incident with industry, state regulators and consultants to correct the situation as quickly as possible.

According to city spokeswoman Kim Womack, the substance is thought to be an oil-based petroleum chemical, but Womack declined to say exactly what that chemical was. Womack said the city is working with the Texas Commission on Environmental Quality and the Centers for Disease Control.

Mayor Dan McQueen told local press that the city’s system, regarding disinfectant, did not fail. City officials think the chemicals were introduced to the system through a valve in the city’s industrial district. The potential contamination was discovered when an industrial property reported a sheen in the water when someone at the property was washing their hands. That happened before 6 p.m. on Wednesday. The city is looking at two “petroleum based” chemicals, but officials are not saying which ones or where the first call came from.

Within minutes of the news, stores throughout Corpus Christi were flooded by panicked residents who quickly wiped out all local bottled water supplies.

Water is being handed out @HEB in Saratoga #CCTXwater #corpuschristi pic.twitter.com/OuSNL2Iim9

Crowds of residents are lined up at stores throughout the city, hoping to be the first ones to get water when emergency shipments are expected to arrive later in the day.

Tens of Thousands of Residents are waiting in long lines throughout the city waiting for water shipments.

A line of shoppers at H-E-B on Saratoga wait at 6:15 a.m. for a shipment of drinking water. #CCTXwater pic.twitter.com/H1kbCSpF44

#CorpusChristi #water #shortage due to #contamination of water supply. I'm in this long line @SamsClub with hundreds of others. pic.twitter.com/Mo6RuLJ5PG