We’ve talked about it a number of times in the past – the Department of Homeland Security’s attempt to militarize our nation’s police forces –  but it seems their efforts have been kicked into high gear as the DHS and local police forces around the country are about to take control of over 13,000 MRAPs  (Mine-Resistant Ambush-Protected Trucks).

This isn’t the first time the Department of Homeland Security has secured these military vehicles, but it is the first time we’ve seen so many taken at the same time. Over the last couple of years, local and state police forces from around the country have secured similar armored vehicles, military weapons and even drones through so-called “terrorism grants” from the Department of Homeland Security.

With these grants, DHS essentially paid to turn local police forces into a de facto homeland military force for the Federal Government. Billions of dollars have been spent arming police forces throughout the country with military grade weapons, body armor, helicopters, tanks, and armored personnel carriers. Some of these police forces are actually better equipped than the soldiers fighting overseas.

Now, the U.S. Army is giving away 13,000 armored trucks, worth about $500,000 each. These high-powered military vehicles, which were built specifically for the Iraq and Afghanistan wars, will now be patrolling the streets of America. 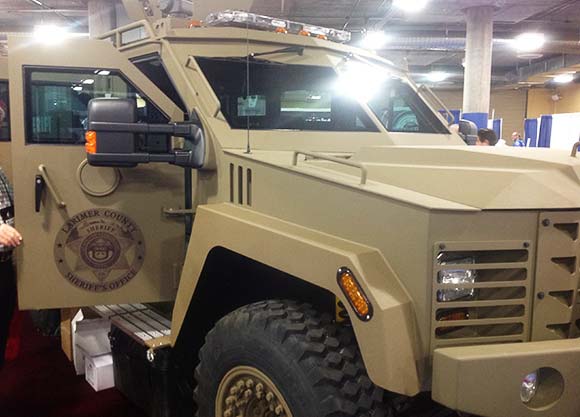 Although most of the warmongers in Congress fully support the idea of militarizing our local police forces, there are a few that are starting to express concern. In fact, Rep. Hank Johnson (D-Ga.) has just introduced what may be the first bill aimed at actually limiting the amount of military weaponry taken by DHS and local police forces.

In an Op-Ed Piece written for USA Today, the congressman explained the need for his bill. He wrote:

Something potentially sinister is happening across America, and we should stop and take notice before it changes the character of our country forever. County, city and small-town police departments across the country are now acquiring free military-grade weapons that could possibly be used against the very citizens and taxpayers that not only fund their departments but who the police are charged with protecting . . .

Seem like a lot? It is. And that’s only in the last few months. This trend is not only sweeping America’s small cities, it’s hitting American college campuses as well. Ohio State University recently acquired an MRAP. Apparently, college kids are getting too rowdy.

We’ve covered a number of these stories in the past; so many now, that it’s hard to believe more people aren’t concerned.

In my opinion, we are witnessing the complete takeover of America. Not only is most of this completely unconstitutional, but it completely ignores the principles this country was founded upon.