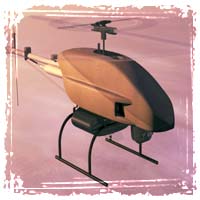 Drones and Gun Control, two topics that go against every tenet this country was founded on, are now being fused together in an attempt to roll back the rights of every American citizen.

In a promotional video from the makers of the Shadowhawk drone, a 50lb mini helicopter used by law enforcement agencies, the company promotes its drone technology for use in gun control. In the video, the company shows a mock scenario where law enforcement officers use the drone to follow two men who are engaged in the private sale of a handgun and a rifle.

Remember, the sale of private firearms is not illegal.

Although gun control activists are trying to legislate your rights away, it’s currently 100% legal for you to sell your guns to another private individual. Despite that fact, the promotional video champions the use of its drone as a way to track and arrest Americans who are selling their guns to other Americans.

This is just another attempt to demonize law-abiding gun owners, and associate their activities with lawbreakers. It’s amazing how the average American has now become a target; it’s equally amazing, the hypocrisy that’s taking place in Washington D.C. right now.

On one hand we have an administration who is actively working to take away our right to bear arms, all the while ordering deadly drone strikes throughout the world, buying billions of rounds of Ammo for their own agencies, arming rogue nations, and supporting rebel forces through the transfer of firearms and weapons.

We have a government who doesn’t trust Americans with the right to bear arms, while at the same time, having no problem sending Sixteen F-16s and 200 Abrams tanks to the Muslim Brotherhood controlled government in Egypt. Why would they actively seek to limit our rights, while encouraging other rogue nations to increase their arms?