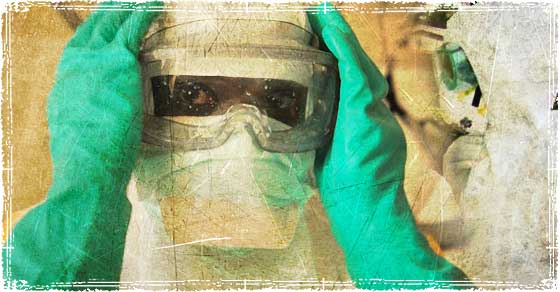 A nurse, who was wearing protective gear while treating the Dallas Ebola patient has contracted Ebola, becoming the first person in the United States to contract the virus from another person and raising fears the virus may be easier to catch than we’re being told.

Despite denials from the CDC, who is blaming the nurse for breaching protocols – even though hospital officials have been unable to identify any breach, there is growing concern that this virus might be easier to catch than we’re being told. According to the hospital, the nurse was in full CDC approved protective gear at all times, and was not exposed to the patient’s bodily fluids.

What the mainstream media, the federal government, and the CDC are not telling you.

This current case raises some serious concerns, especially because the CDC assured the public it had no chance of happening in our nation’s “top-rated hospitals.” First, it highlights how little we actually know about the Ebola virus, which is why we should have never allowed infected people into the country to begin with. Second, it shows how criminally negligent our government and the CDC really are.

Instead of doing the responsible thing and immediately closing down air traffic from West Africa, the criminally incompetent head of the CDC, Dr. Thomas Freedman, instead attacked the nurse – claiming she must have done something wrong while treating the patient.

At a press conference addressing the most recent case of Ebola, Freedman told reporters, “At some point, there was a breach in protocol, and that breach in protocol resulted in this infection,” he said at a news conference Sunday. “The (Ebola treatment) protocols work. … But we know that even a single lapse or breach can result in infection.”

These people are either incompetent, or criminally negligent in their duties to protect the public. We spend billions of dollars every year, expecting these agencies to be able to protect us from harm, and they don’t even have a plan to deal with a single Ebola patient.

What’s going to happen if this thing starts to grow out of control?

Our nation’s healthcare professionals have been warning the CDC that our hospitals are not ready to stop an Ebola outbreak, yet the CDC continues to allow infected people into this country. And from the looks of how the CDC handled the first case, we will more than likely see more infections over the coming weeks.

Our federal government needs to stop being politically correct, and they need to take real measures to protect the public. Instead of blaming the nurse, who was only put at risk because of the governments open borders policies, they need to immediately restrict travel from any country with an active infection during the last 21 days.