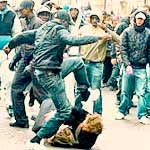 Something to Watch Out for on Election Day

Here is just a small sample of the threats that are being made on Twitter:

Is the Government getting Ready for Rioting & Social Unrest?

Over the last 12 months we have documented numerous examples of how the government seems to be preparing for large scale civil unrest. We’ve also covered a number of examples of the military has been training for violence on the streets of America.

It seems some people are hell bent on seeing this violence happen. Even the mainstream media seems to be trying to stoke the flames of violence.

MSNBC Host Loses it on Air…. Threatens Mitt Romney’s Son and challenges him to a fight.