The Federal Communications Commission (FCC) is proposing a rule change that will allow President Obama, as well as future Presidents, the ability to instantly communicate with everyone in the country with the flip of a switch. 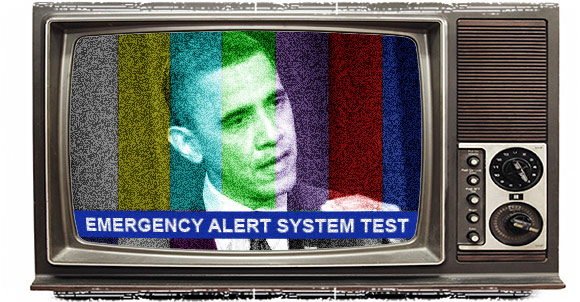 In the event of a nationwide emergency, the National Emergency Alert System (EAS) is designed to broadcast emergency alert messages warning of impending dangers. The system is often used to warn people about severe weather, flash floods and imminent natural disasters like hurricanes.

Up until now the EAS was primarily used on a localized level, but that may soon change as the FCC is in the process of allowing the President direct access to the system where he will be able to break into television broadcasts nationwide, access all phone systems, and even send alerts through the internet. Under the new proposal, the President of the United States would be able to instantly break into all broadcast signals nationwide, and speak to the nation in the case of something like a terrorist attack or act of war.

While the National Emergency Alert system, or anything that gives people advanced warning to impending dangers, is in my opinion a good thing, there are some concerns over allowing one person access to this much power.

Critics are warning that with the ability to instantly takeover the nation’s airwaves, the system could be ripe for abuse – allowing this, or future Presidents to use the system for political gain. Another worry is what will happen if the system is used to blast out alerts every time there is a perceived threat, which could cause people to just tune out.

Back in 2011, when the FCC started to roll out the new National EAS system, a nationwide test of the system exposed a number of problems. In fact, the first test was a complete failure. Most areas of the country didn’t receive the test message, and in areas where the broadcast did go through people complained of audio problems or local broadcasts that went completely dead.

The FCC is claiming that the newly proposed changes will address problems identified by the 2011 nationwide EAS test – even though nothing in the proposal address the audio/visual problems encountered during the 2011 test.