The same Federal Government that can’t fix the economy, health care, the oil spill, or anything for that matter, will now be sending breaking “emergency” news right to your computer and cell phone. 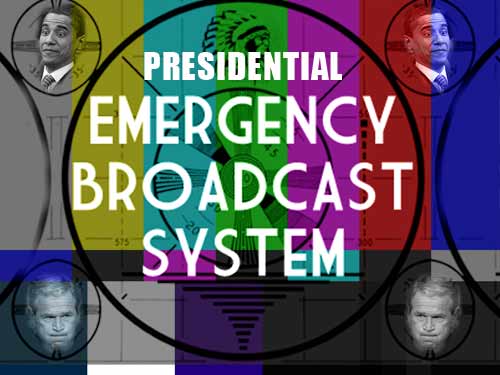 The FCC and the Obama administration are announcing an overhaul to the emergency broadcast system. The FCC will require all television, radio stations, cable, and satellite television providers to take part in a test of their new presidential alert system.

The new alert system will transmit messages directly from the President of the United States during a so called “national emergency.” This new system is also being developed to send alerts right to your cell phone and your computer through your broadband connection.

Do we really want the federal government to be able to text us, or pop messages on to our computers? How long will it be before this system is used for political purposes?

In a press release, the FCC stated that the system could be used to alert the public to “potential danger, nationwide and regionally.” To me this just seems idiotic. Even if this system isn’t abused for political purposes, which I’m sure it will be, do we really need these morons to alert us every time there is a perceived threat?

How long will it be before the public starts to tune these messages out? Remember the color coded terror alerts?