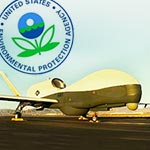 The U.S. Government’s Green Police Force, the one we told you about a couple of months ago, is now actively spying on American farmers in what I believe is an attempt to regulate them out of business.

News broke after Nebraskan law makers sent a letter to the EPA demanding that they stop using surveillance drones to spy on Nebraskan Farmers. Apparently, the Environmental Protection Agency (EPA) is now using drones to spy on Farmers. For years these same drones have been used by the U.S. military to track down terrorists overseas, now it looks like the U.S. government has turned these drones on the American Public, specifically farms.

So what exactly is the EPA looking for with these drones?

That may come as a shock to most Americans who still believe in the Constitution of the United States and our 4th Amendment right that protects us from illegal search and seizure. But remember this is the same EPA who went after the Sackket family and illegally seized their land under these same water acts.

It’s also the same EPA who was filmed earlier this year admitting that they use fear tactics to scare the public into obeying the law. In fact, one administrator went even further with his tactics when told his staff their job was to crucify law breakers in the same way as the Romans. He was caught on camera saying:

“The Romans used to conquer little villages in the Mediterranean. They’d go into a little Turkish town somewhere, they’d find the first five guys they saw and they would crucify them. And then you know that town was really easy to manage for the next few years.”

Mainstream Media on the Attack

After news of the surveillance drone program broke, the governments attack dogs (the mainstream media) immediately sprang to action. No, they didn’t try to get to the bottom of what was going on; instead they attacked the messenger.

They feverishly attempted to cover the story up by denying that these drones even existed. In fact, they set out on a smear campaign where they attacked Internet Radio Host, Alex Jones and claimed that he made up the story.

But wait, didn’t the EPA admit to using these drones?

While the government and the mainstream media would like to cover this story up, it seems the EPA may have already let the cat out of the bag. In an official response to the lawmaker’s letter, the EPA admitted to using these drones.

The EPA’s governing statutes provide authority for the agency to conduct investigations, inspect facilities, request information, perform monitoring and take other actions necessary to ensure that our nation’s environment is protected from unlawful pollution.

They go on to say:

Aerial over flights are only one of many tools that are used as part of the compliance assurance process to identify discharging sources that may impact water quality. Over-flights and other sources may provide information regarding the general condition of a farm such as size, storm water management features, manure management systems and proximity to waterways.