Rep. Lamar Smith, R-Texas, chairman of the House Science, Space, and Technology Committee, is accusing the Environmental Protection Agency of secretly trying to take over large amounts of private property throughout the United States. 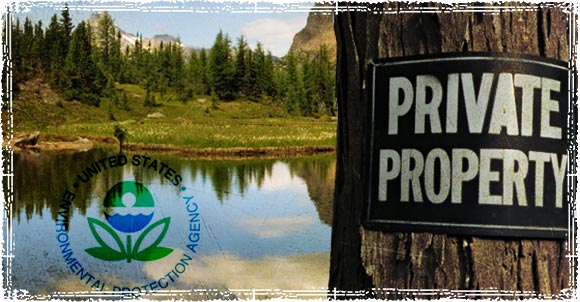 Rep. Smith released a series of EPA maps which he claims shows the agency’s plan to expand their regulatory power over streams and wetlands – making way for a large takeover of private land in the United States

In a letter to the EPA, obtained by Fox News, Rep. Smith writes: “These maps show the EPA’s plan: to control a huge amount of private property across the country. Given the astonishing picture they paint, I understand the EPA’s desire to minimize the importance of these maps.”

Over the last couple of years I’ve covered a number of stories on how the EPA was abusing their regulatory powers, and using the Clean Water Act to take land from private property owners, by redefining dry land as “protected wetlands”.

By redefining the term “Waters of the United States”, the EPA is attempting to take control of all tributaries, regardless of size and flow, and all private and public lakes, ponds and streams. The proposed rules would give the EPA control of temporary waterways like seasonal streams, and even land where heavy rainfall causes runoff to flow into a body of water.

Pattern of Abusing their Regulatory Power:

For years now the EPA has been going after private land owners, using the Clean Water Act as a way to either seize property or intimidate land owners with heavy fines and civil penalties.

Earlier this year a family in Wyoming discovered just how powerful the EPA has become, after they were ordered to remove a stock pond from their property and then fined 75,000-a-day.

Andy Johnson built the small pond on his eight-acre property as stock pond for trout. He wanted a place where his family could play, and an area where his horse could drink and graze. After finishing construction on the pond, Johnson was accused of violating the Clean Water Act and ordered to return the land to its original condition.

Despite filling out all the appropriate paperwork and getting approval to build the pond from the Wyoming State Engineer’s Office, the EPA insisted they have the final say over what gets built on the land.

In 2005 Mike and Chantell Sackett purchased a small 0.62 acre parcel of land. After obtaining all the necessary local permits the Sacketts started to clear their land so they could build a small three-bedroom family home. Without a judicial hearing or notice, the EPA told the couple to immediately stop construction and to return the land to its original condition. They were accused of violating the Clean Water Act.

The EPA claimed the Sacketts property was on protected wetlands, and then demanded payments of over a quarter of a million dollars to “request” permission from the U.S. government to build on their own land.

Armed with what they believed to be proof that the land was not federally protected “wetlands,” the Sacketts tried to challenge the EPA’s claim; to their surprise they were denied a hearing and told by the Ninth Circuit Court of Appeals that they had no right to immediate judicial review. After years of battling the federal government, the ruling was later overturned by the Supreme court who found the Clean Water Act does not preclude judicial review under the Administrative Procedure Act.

Has the American Dream of Land Ownership become an American Nightmare?

Sadly these types of stories are not uncommon; in fact, they are happening throughout the country each and every day. I’ve covered these types of stories numerous times in the past: from a WWII vet who was forced out of his 88-year-old family owned grocery store; to the heartbreaking story of Andrew Wordes, who took his life after code enforcement teams seized his home; to the Off-Griders in California who were threatened with arrest for daring to live an off the grid lifestyle, these stories highlight how out of control the federal government has become at every level.

Our basic rights are being stripped from us right before our eyes, and the once great American Dream of owning your own little piece of land is quickly becoming an American Nightmare.