Detention Centers, Militarized Red Zones and Mass Evacuations planned for Downtown Chicago During NATO.
The plan to evacuate Chicago seems to be picking up stream. 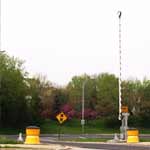 The Illinois Department of Transportation is testing an emergency plan to shut off access into and out of downtown Chicago. The plan uses a network of highway security gates that are designed to shut down all traffic coming in and out of Chicago in the event of a terrorist attack.

The Illinois DOT is warning truckers that it’s best to avoid the city during the NATO Summit in Chicago May 20-21.  There will be a number of driving restrictions and rolling street closures, and the Illinois DOT is testing highway barricades that will block access to all major highways in and out of Chicago.

These barricades, which started being installed on Chicago highways back in 2005, are deigned to restrict or cut off access to roads during an emergency like a bioterrorism attack.

A Federal Highway Administration Office of Operations publication has this to say about the gates:

Gates in Chicago, Illinois – During an evacuation, the need for traffic management can become critical to help direct people and cars fleeing from the evacuated area and to ensure additional people and cars do not enter the evacuated area. The Illinois Department of Transportation is “testing an emergency plan to shut off access to downtown Chicago from local expressways during a terrorist attack or other catastrophe in the Loop, officials said Tuesday (May 17, 2005). The measure is aimed at speeding up the evacuation of the downtown during a disaster by more effectively controlling traffic and panicky drivers. It involves installing up to 80 gates to block access to inbound expressway ramps along five interstate highways that lead into the city, according to the Illinois Department of Transportation (IDOT). The remotely operated gates, a heavy-duty version of the barriers already in place on the Kennedy Expressway’s reversible express lanes, would swing closed to prevent vehicles from entering highways to travel to or through the central business district,” as reported in the Chicago Tribune article “Gates Would Cut Access to Loop in Terror Attack.”

In addition, according to the article, “the automatic gates would free up officers for other duties in an emergency. The Chicago region’s evacuation plan counts on posting police at highway ramps to stop non-emergency vehicles from entering. ‘With the gates, you wouldn’t need a police cruiser blocking or guarding every ramp,’ said IDOT spokesman Mike Claffey. If the experiment is successful, the barrier system would be expanded to include up to 80 inbound ramps on the Kennedy, Dan Ryan, Eisenhower, Stevenson and Edens Expressways, Claffey said.”

The Illinois DOT’s testing of these highway entrance ramp gates has many worried about the chaos that NATO may bring to Downtown Chicago. There is already talk about widespread city wide evacuations, rioting, terrorist attacks and even large scale detention centers and arrests. 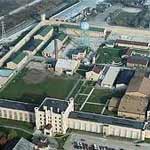 It’s been reported by the local media, that Cook County Sheriff Tom Dart is devising a strategy to deal with large-scale mass arrests during the NATO Summit meeting. In fact, the Chicago Sun Times is reporting that the once abandoned Joliet State Prison may be reopened as a mass detention center for NATO.

Joliet prison is about 40 miles from Chicago and can hold about 1,300 prisoners. The Sheriff is also reportedly looking at building tents in the yard at Cook County Jail.

Starting May 1st, a full three weeks before the NATO Summit, the Federal Government will be setting up a Militarized Red Zone in the streets of Downtown Chicago.

In a Chicago Sun Time Article:

The head of Chicago’s NATO Host Committee said Thursday she was blindsided by the federal government’s decision to create a militarized “Red Zone” in the Loop to protect federal buildings in the run-up to the May 20-21 summit at McCormick Place.

The news of federal agents on the streets of Chicago isn’t sitting well with many. From last months urban warfare drills, to residents being warned of possible citywide evacuations, the city of Chicago is starting to look like a city that may already be under martial law.