If you have any of the items below you might be a terrorist…. at least the FBI seems to think so…..

According to an article over at the Oathkeepers the FBI has been asking military surplus store owners to spy and collect information on people who would normally fall under the prepper category. 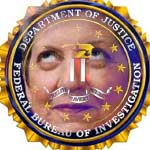 The FBI has been handing out literature, entitled “Communities Against Terrorism: Potential Indicators of Terrorist Activities Related to Military Surplus Stores” that instructs the store owners to:

A similar flyer has been distributed to gun stores throughout the United States as the FBI is apparently looking to crack down on those dangerous preppers.