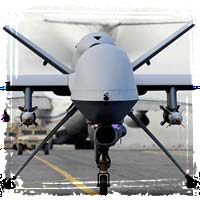 In testimony early Wednesday, the head of the FBI, Robert Mueller, confirmed to lawmakers that the FBI owns a fleet of unmanned aerial drones and admitted to using them to spy on the American public.

In the latest string of spy scandals, the FBI is now admitting to using drones in homeland operations. In a Senate hearing, Sen. Chuck Grassley (R-Iowa) asked Robert Mueller, the director of the Federal Bureau of Investigation, if “the FBI uses drones for surveillance on US soil?”

“Yes,” Mueller responded bluntly, adding that the FBI’s operation of drones is “very seldom.”  “It’s very seldom used and generally used in a particular incident where you need the capability.”

Spying, Drones & the Militarization of the Federal Government

As we’ve reported a number of times in the past, the amount of war-time machinery being purchased by our federal government is staggering. What’s even more disturbing is the fact that most of this military equipment is not going to the military; it’s being used to arm federal agencies that have no business having this type of equipment. It’s almost like the feds are building themselves their own private military force.

From DHS purchasing billions of rounds of ammo and thousands of MRAP vehicles for homeland operations, to DHS  buying a fleet of Predator B Drones that will be deployed throughout the United States, our federal government seems to be preparing for some sort of war here in America.

What was once dismissed as the ramblings of conspiracy theorists can no longer be ignored so easily. The facts are out there for everyone to see; during the last couple of weeks, our government has had to admit to what most of us have been saying for years.

Not only do they have systems in place that can spy on everyone, but they seem to be using them to specifically target American Citizens.