The system has had its fair share of problems, including sending out random messages that had nothing to do with emergencies and failing during its first test back in 2011.

During that initial test of the system, problems were reported throughout the country. In some instances, instead of seeing the mock emergency alert, people were instead switched to random television broadcasts. DirectTV customers reported hearing Lady Gaga’s “Paparazzi” play during the test interval. Some Comcast subscribers had their channels changed to QVC before the alert and Time Warner Cable customers in New York said they didn’t see any alert at all. 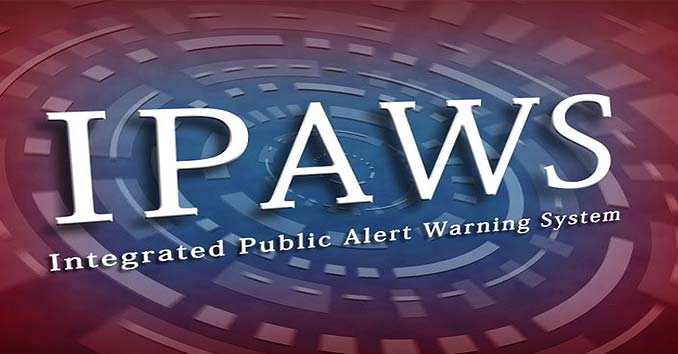 Accoring to FEMA, The one-minute test was conducted with radio, TV and cable stations around the United States. The test verified the successful transmission and broadcast of a national test message.

Today’s test seemed to go off without too many problems, although there were a couple of random reports on Social media of people having similar problems to the 2016 glitches.

One Twitter user reported that while the EAS alert started to scroll, the audio on his television switched over to a clip of Radio Talk show host Rush Limbaugh saying “We have to get out of here, We have got to get off this planet!” Probably not something you want to hear during a test of the emergency alert system.

Later in the night, WKTV News Channel 2 in Utica, New York reported the FEMA IPAWS EAS system was hacked, sending out a number of bizarre messages to residents in Utica.

IPAWS National Test Technical Lead Al Kenyon said, “This was the first time we’ve served every EAS device in the country at the same time.”

When is the FEMA IPAWS Alert system activated?

The Nationwide alert system cannot be activated without the President. The President has sole responsibility for determining when the EAS will be activated at the national level, and has delegated this authority to the director of FEMA.

At a local level, the system may be used by state and local authorities to deliver important emergency information, such as AMBER alerts and weather information targeted to specific areas.

Today’s test of the emergency alert system coincides with the government’s efforts to promote National Preparedness Month. For Americans, this is a good reminder of the importance of emergency preparedness, and a good chance to share information with those friends and family who may not take the topic as seriously as they should.