Yesterday we covered the first ever nationwide test of the FEMA IPAWS integration into the Emergency Alert System; while there were a few random glitches, at first it looked like everything went well. But last night, in Utica, New York, Television viewers started seeing weird messages pop up on their screen warning of a pending Hazardous Materials disaster somewhere in the United States.

The odd warning was sent over WKTV News Channel 2 in Utica, New York. The station quickly sent out a message on their Facebook page saying there was no emergency and blamed the message on FEMA test codes that were not intended for public broadcast. But hours later, concerned viewers reported seeing the message pop up on their screens again.

The Emergency Alert Broadcast ended with part of a line from the Dr. Seuss book, Green Eggs and Ham. It Read:

“Would you. Could you. On a Train? Wait for further instructions.”

The Station then posted another update to their Facebook Page saying:

Another warning message was sent out in error at 10:38 p.m.
There is no emergency. This message originated from FEMA as a test and had the National Location Code in it. Tests should not have that code as it is automatically re-transmitted. We apologize for any inconvenience.
We have contacted New York State Broadcasters Association who administers the Emergency Alert System in NY. We are working with FEMA to resolve this. 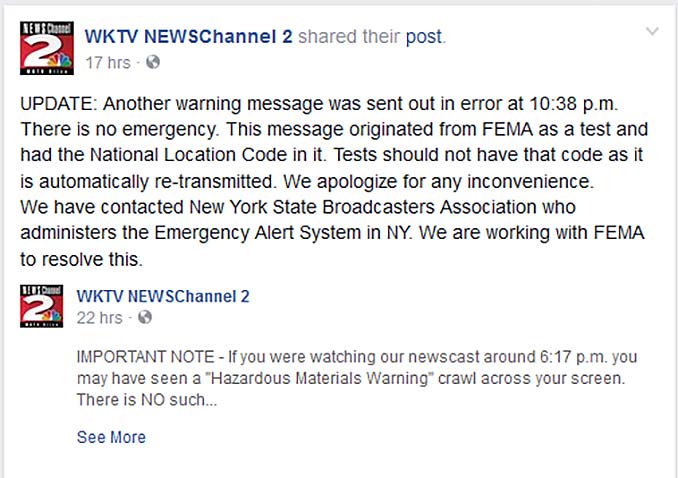 FEMA replied that they did not send this out. They will launch a full investigation into how their codes were hacked. WKTV seems to be the only target of this hack. For now, we have disabled the codes in our decoder that trigger this alert. If there is a real National Alert, we will still receive it from the local radio stations we are assigned to monitor. WKTV will cooperate fully with FEMA, providing information about our hardware, software and internet access, and will provide log files from our devices. This information will be helpful to FEMA to track down the source of this hack.