The FBI is investigating five major bank security breaches this month that experts think may have come from state-sponsored hackers in Russia. The attacks, which happened earlier this month, gave hackers access to gigabytes of checking and savings account data that could be used to drain accounts. 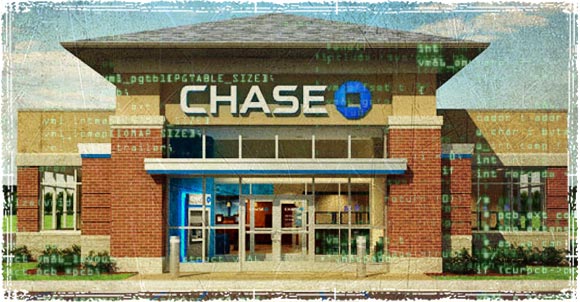 JPMorgan Chase was one of at least five US banks hit by the hacking attack, where hackers extracted data by using a sophisticated malware that reportedly infected employee’s desktop computers.

Last year Chase was hit by another Hacking attack that temporarily wiped out their customers’ accounts, causing millions of chase customers to see a balance of $0 when trying to withdraw funds. Chase later claimed the issue was caused by technical difficulties, but hours after the attack the hacker group anonymous claimed credit for the vanishing balances on Twitter.

This month’s hacking attack on U.S. banks were some of the most advanced attacks yet, aimed specifically at stealing customer data instead of just disrupting banking operations.

According to a report by Bloomberg, the attacks may be tied to a series of recent hacks against European banks. Because of the advanced methods used in these breaches, where multiple layers of security were penetrated to steal the data, FBI officials suspect that there was some government involvement in the attacks. The methods used during these attacks were far beyond the capability of most criminal hackers.

While the other four banks have not yet been identified, customers of all U.S. banks should be on alert for fraudulent charges and should at the very least change their online banking passwords – something all online banking customers should be doing on a regular basis to begin with.

Unless the contract that you signed when you opened your account specifically says it covers lost funds due to hacking attacks, a bank has no real obligation to reimburse your loses. Many people mistakenly think the Federal Deposit Insurance Corporation (FDIC) covers their loses after this type of attack; it does not.

FDIC Insurance does not protect you from ID theft, unauthorized access to funds, or hacker attacks.

FDIC Insurance applies to banks that have gone under, and only protect your money in the event of a bank failure. It does not protect you from someone gaining access to your account and stealing your money. Many bigger banks will reimburse your account if their security is breached, but most only do so to maintain the illusion of security. Many people have actually had to go to court to recover their funds after their bank refused to reimburse when their accounts were hacked.

Even more problematic for banking customers is if they are in some way responsible for their account being hacked. If a bank thinks your account was hacked because your personal information was obtained due to a lack of security on your end, then the chances of the bank reimbursing your loses go down even more. A growing number of banks are starting to tell customers they should have been more careful with their passwords or personal data.

How to protect your Bank Accounts: