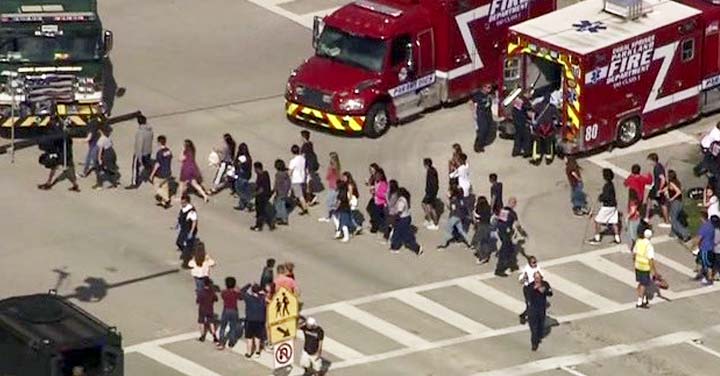 At least 17 people are dead and wounded after a gunman opened fire inside of Marjory Stoneman Douglas High School in Parkland, Florida.

Broward Schools Superintendent Robert Runcie said there were “numerous fatalities” but the exact is still unknown. At least 14 victims have been taken to local hospitals, the Broward Sheriff said, and the scene is still active.

Students report the shooting started shortly after a fire alarm was pulled at the school. CBS News is reporting that law enforcment sources tell them it looks like the shooter “pulled the school fire alarm causing chaos and then began shooting.”

JUST IN (warning, disturbing video): Cell phone video inside the school as shots were going off at Marjory Stoneman Douglas High https://t.co/wHWo6XjccX pic.twitter.com/3ovf5LhzBs

Students tweeted video from inside the school (warning: graphic content):

Let this sink in and tell me it’s not time for sensible Gun Control. Save your thoughts and prayers. pic.twitter.com/WlJo1W8mKw

President Trump tweeted about the attack:

My prayers and condolences to the families of the victims of the terrible Florida shooting. No child, teacher or anyone else should ever feel unsafe in an American school.

The suspected shooter, identified as 19-year-old Nicolas Cruz (Nicolas de Jesus Cruz), has been apprehended by Broward County police. Sources report that the suspect is believed to be a former student at the school.

Facebook and Instagram have already pulled the suspected shooters social media profiles because we live in an era where the truth is not important, only the political agenda they want to push after the event. Like how the mainstream media tried to sell the narrative that this shooter was a white male and only reported on part of his name because the full name “Nicolas de Jesus Cruz” obviously doesn’t fit their agenda.

I guess it’s kind of hard to push the “white NRA guy” theme if they report on his real name or allow his social media profiles to remain public.

We have a right to see their accounts and posts.#Parkland #Florida pic.twitter.com/smEfMdRa1c

Sen. Chris Murphy speaks about Florida school shooting on the Senate floor: “We are responsible for a level of mass atrocity that happens in this country with zero parallel anywhere else.” pic.twitter.com/KxTl8N07jW