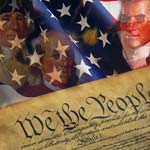 According to a report over at dont-tread-on.me, one of their contributing writers was taken into custody late last night after his home was raided by The Police, FBI and Secret Service.

Brandon Raub, a former Marine and contributor to the Don’t Tread on Me Blog, was taken into custody and is now being held at the John Randolph Mental Hospital. His mother, who spoke to the blog, suggested that her son may have been arrested for a series of Facebook and blog posts where he talked about being prepared for a coming revolution.

Brandon Raub was part of a grassroots Liberty Movement in Richmond, Virginia. In one of his blog postings he said his group stood for: Personal Freedoms, Respect for the Rule of Law and the Constitution, and Sound Money.

His mother says she was told by the F.B.I. that they believed her son was making Facebook postings that were “terrorist in nature”. She says that “they showed up inquiring about his postings on Facebook, and then they just took him away.

Here is A Video Interview with his Mother from the Don’t Tread on Me Site:


A couple of months ago we warned that the F.B.I. considered anyone who questions the government to be a potential terrorist. In fact, they even held a Press Conference where they warned law enforcement agencies across the country about the growing threat of so-called “Anti-government extremists” who believe in personal responsibility and oppose taxes and government regulations.