Back in 2012 we reported on a bill signed by President Obama, H.R. 347, which gave the federal government the ability to ignore the constitution, suspend free speech, and setup so-called FREE SPEECH ZONES. While most Americans completely ignored what was going on, choosing instead to focus on what celebrity was sleeping with whom this week, the feds moved to use their newly found power to kill your right to petition the government and your right to assemble.

Since 2012, the feds have used this legislation to set up “Free Speech Zones” during a number of high-profile events including President Obama’s inauguration. Anyone caught trying to exercise their first amendment rights outside of these so-called free speech zones could be arrested and face felony charges – punishable by up to a year in jail.

In the latest abuse of power, which again has gone completely unnoticed and unreported by the mainstream media, the Federal government has suspended free speech near Bunkerville, Nevada to hide their illegal actions as they raid a local ranchers land. 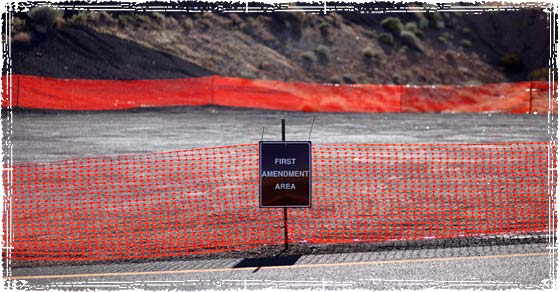 Yesterday, we reported on the story of Cliven Bundy, a local Nevada Rancher whose land is now surrounded by government snipers because he refused to pay the BLM fees to use his own land. As a result of the standoff, some local Nevadans started to make their way towards the Bundy ranch to support Bundy and make their voices heard. Unfortunately, that became impossible as the Federal Government blocked access to the Gold Butte area near Bunkerville. 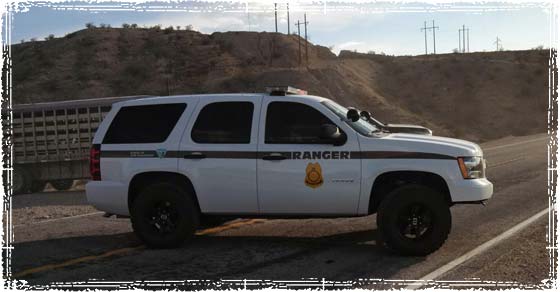 Even more appalling, is the fact that they suspended free speech in the area, and actually fenced off an area miles away from town that they called a “FIRST AMENDMENT ZONE.” Yes, you heard that right. Your government actually suspended free speech and then penned off an area where they intended to corral American Citizens who wanted to exercise their first amendment rights.

I want you to take a good look at this picture again. Notice that they have these signs printed and ready to go. This is not a onetime deal; this government has declared the Constitution dead and has replaced your First Amendment rights with a Free Speech Cage. At any time and in any place they can declare your rights to be invalid, and nobody seems to care.