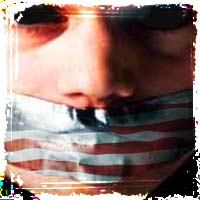 Earlier this year we told you how President Obama and the cowards in Congress were working to take away your right to protest by implementing Free Speech Zones. These zones, which were supported by both political parties, allow the Federal Government to decide when and where Americans have the right to Free Speech.

In a sickening public attempt to trample on your first amendment rights, your right to speak and protest was taken away in Washington D.C. today. Earlier this year congress passed H.R. 347, a bill that allowed them to set up free Speech Zones. Today the Feds enacted that law in an attempt to make the President look like he had the full support of the American people.

Throughout the entire Inauguration route, the Secret Service set up zones where freedom of speech was not allowed. Anyone who wanted to publicly speak in opposition to the President’s Agenda was corralled into “authorized demonstration zones” that were far out of sight of any cameras or media. Those who openly protested faced felony charges that were punishable by up to one year in jail.

There were a number of major demonstrations planned for today, but the National Park Service revoked all permits. Protestors were forced into a 10-yard wide strip of sidewalk that was ironically right near Freedom Plaza. This was the only area where free speech was allowed!