For the third day, U.S. Stocks are taking beating as the market fell over 1,000 points in the first minutes after the opening bell. Stocks rallied a bit early in the day, but closed the day down over 585 points. Many are fearful that this could be the straw that breaks the camel’s back.

Last week the U.S. Stock Market plummeted by over 1,000 points, causing even the idiots in the media to admit that we may be in for some major trouble. Then this morning, in the opening minutes of trading, traders panicked and the markets dropped over 1,000 points in a matter of minutes. 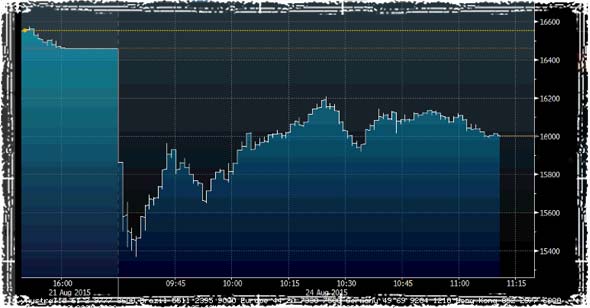 Hundreds of billions wiped off world’s financial markets today, as Chinese crisis sends stocks tumbling in Europe, Asia and the US

Signs of a major slowdown in the world’s second-largest economy have sent shockwaves throughout the world’s markets. Financial markets in the U.S., Asia and Europe have all taken a major hit as investors increasingly raise alarm bells about declining Chinese demand.

Markets began falling last week after China announced they were devaluing their currency, the Yuan. The Chinese Government made the move after Chinese markets fell over 30% in the last month and a half. But in overnight trading, Asian markets took a beating as the Shanghai Composite in China closed down 8.5%.

This caused even more panic, causing the pan-European Stoxx 600 index to trade down 6.7 percent after opening around 3.3 percent lower. London’s FTSE 100 index dropped 4.1 percent, the German DAX was off by around 4 percent, and the French CAC slipped over 4.7 percent.

“The dismal manufacturing figures from China leaves the door open for more devaluing of the yuan. Throughout the past year, China has been very aggressive in its stimulus schemes, but they still aren’t enough to sustain high levels of growth,” David Madden, IG market analyst, said in a note. “The only option for Beijing will be additional monetary easing which will effectively put the brakes on the U.S. recovery.”

Damian McBride, a former adviser to British Prime Minister Gordon Brown, is warning that the current crisis could lead to widespread civil disorder. He warned that what’s coming will be 20 times the scale of the 2008 crisis, and advised people to “’Stock up on canned goods and bottled water” and have “a rally point with your loved ones in case transport and communication gets cut off; somewhere you can all head to.”

Advice on the looming crash, No.1: get hard cash in a safe place now; don’t assume banks & cashpoints will be open, or bank cards will work.

How much more can the economy take? 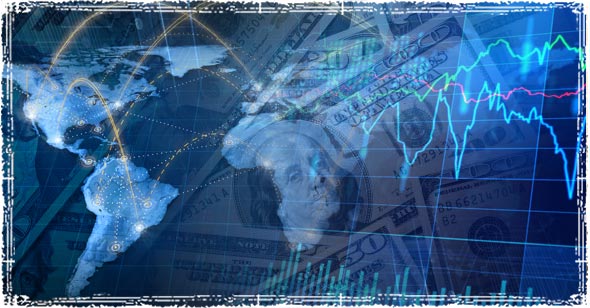 While today’s selloff should set off alarm bells, the fact is, the U.S. economy has been in trouble for quite some time. The problems that lead to the 2008 financial crisis we’re never adequately addressed, and I would argue that today’s economy is in even worse shape than in was in the lead up to the 08 crisis.

This current crisis may be just a warning sign of what’s to come; but make no mistake, trouble is coming.

The U.S. now sits at roughly 18.2 Trillion in debt, with unfunded liabilities that push that number closer to $220 Trillion. Between the crash of the global markets, the student loan debt bubble that’s about to burst, and one of the lowest labor force participation rates in our history there really is no denying what’s coming; we are heading towards a major financial crisis.

The Continuing Collapse of the U.S. Economy

Since 2008, the mainstream media has gone into overdrive trying to convince the public that the economy was recovering. But when you look at the real numbers, we are in some serious trouble.

Since the economic crisis in 2008, President Obama has almost doubled the national debt. On the day Obama was sworn into office, the National Debt hit a staggering $10.626 trillion; since that time it has since ballooned to over $18.2 trillion.

If you haven’t started taking steps to prepare yourself for the coming chaos, you need to take a serious look at what’s really going on in this country and throughout the world. From an economy that never really recovered, to governments and international banks calling for a ban on paper currency, the signs are everywhere; you need to start preparing.

How to prepare for the coming Global Economic Meltdown

Because I think it’s one of the most pressing threats we face, I devoted an entire section to financial preparedness in my book, The Ultimate Situational Survival Guide. Some of the suggestions I outline include:

Start Immediately Cutting Expenses: If you can live without it, now is the time to start cutting all inessential items out of your budget. The money you save by cutting things like cable, $5 lattes, and useless consumer crap can be poured into reducing your debt and stockpiling emergency supplies and long-term consumables.

Start an Emergency Fund: You need to have cash on hand. While cash will quickly become worthless during a complete collapse of the global economic system, in the lead up to the crash it’s going to be essential to your survival. Starting an emergency fund is one of the best ways to ensure you can protect yourself and your family once things start to go bad.

Invest in Long-term Consumables: During a complete collapse, the only thing that will be worth anything is long-term consumables. Start stockpiling things that you know you’ll need and use in the future. Emergency supplies, long-term food, land, and everyday household goods are all things that will continue to hold their value long after the collapse.

Invest in your Defense: When things start to turn ugly, one of the biggest dangers you’re going to face is criminals who are looking to take advantage of the situation. The social unrest and violence that we witnessed in both Baltimore and Ferguson are going to pale in comparison to what we’ll see during a full-scale economic collapse.

Have a Bugout Plan: If things go South, you need to have a backup plan. During extreme times of social unrest, there may be a time when the only way to survive the chaos is to evcuate from your immediate area. Remember the chaos in Ferguson and Baltimore? Now imagine what will happen if the entire system crashes. It’s not going to be pretty.