After placing purchase orders for almost 2 billion rounds of ammunition, it seems the federal government is up to its old games of trying to manipulate the county’s ammo supplies. The latest government agency to place a purchase order for a large amount of ammo, is an agency that doesn’t even arm most of its agents – The Transportation Security Administration (TSA) 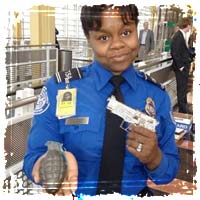 The TSA is seeking to purchase 3,454,000 rounds of .347 SIG Caliber training ammunition. The Agency placed a solicitation for bids on the government’s FBO Website on August 16th. Since the TSA technically falls under the Department of Homeland Security, it’s hard to believe the agency needs even more ammunition. Isn’t 2 billion rounds enough?

Even more bizarre, is the fact that this is actually the second time the TSA has tried to get their hands on a large amount of Ammo. Earlier this year we reported the Department of Homeland Security attempts to arm TSA Agents. It seems like this ammo purchase confirms that earlier story.

When are people going to wake up? The Feds are building their own private homeland military force, and no one seems to be asking any questions as to why DHS needs so much ammo.

As we keep pointing out, the federal government is spending billions upon billions of your tax dollars in an effort to build their own private military. From turning your local police departments into de facto military forces, to arming just about every agency in the federal government, something just isn’t right with this picture.

I posted this video earlier this week, but in light of today’s news, I think it’s appropriate to post it again.