In the Federal Governments latest attempt to regulate everything we do the Obama administration in the process of implementing an executive order to take over our waterways and oceans.

The Obama’s administration bold new plan to take control of our oceans and waterways is starting to pick up steam. In what some see as an attempt to take over the nation’s energy resources, fisheries, and recreational areas; this administration is in the middle of an unprecedented power grab like nothing we have seen.

Executive Order 13547 – “Stewardship of the Ocean, Our Coasts, and the Great Lakes”, was signed by President Obama in 2010. The Executive Order, which is about to go into effect, established yet another government bureaucracy called The National Ocean Council (Links to the Government Website). What this administration did by establishing the National Ocean Council, was to basically create a national zoning board that could regulate any activity that may affect our waterways, inland communities and oceans. It will effectively dictate what activities can and can’t take place on our waterways.

Rep. Bill Flores of Texas warned, “This one to me could be the sleeping power grab that Americans will wake up to one day and wonder what the heck hit them,” said Rep. Bill Flores (R –Texas).

He went on to say that, “The order says they shall develop a scheme for oversight of oceans and all the sources thereof,” Flores said. “So you could have a snowflake land on Pikes Peak and ultimately it’s going to wind up in the water, so as a result they could regulate on every square inch of U.S. soil.”

And you better believe that this order will eventually affect our land and property rights. After all, the EPA has already used these waterway acts to regulate land ownership by declaring dry land as “protected wetlands”. And it seems that the Obama administration, through the Department of Homeland Security, has already set up an agency to police these policies. 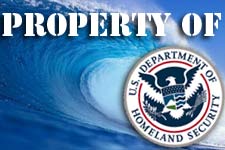 Earlier this week, we ran an article exposing the Department of Homeland Securities Green Police Force.  This new task force was formed to combat what the government is calling “environmental inequities”. According to DHS their new mandate will have them partnering with local and state governments to solve environmental problems and promote environmental justice. This new green police force has the power police anything they see as an environmental issue including our oceans.

The effects of the National Ocean Policy will be felt by a number of industries including energy, shipping, fishing, marine commerce, and even industries that have little to do with our waterways. It’s also expected to heavily impact recreational activities through policies that will further regulate fishing, hunting, boating, and other water related recreational activities.

The administration is currently putting final touches on its National Ocean Policy, and is expected to roll out implementation sometime shortly after the elections. These policies have received very little media attention and for the most part have largely flown under the radar. There are a few people in congress who are trying to block all funding for the implementation of a National Ocean Policy, but even that has received very little attention.