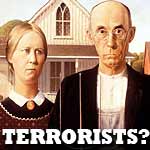 Over the last couple of months, we have detailed numerous examples of how the government seems to be targeting small family farmers. From Michigan raiding small family farms and making it a crime to breed free range pigs, to the federal government’s attempts to make it illegal for kids to work on farms, the attacks on farmers seem to be escalating.

In the government’s latest assault on the small family farm, we learned about a family who is fighting the federal government after it seized their bank account and stole $70,000 of their hard-earned money.

It seems the Sower family, who owns the South Mountain Creamery in Middletown, Maryland, is being prosecuted by the Department of Justice under the post-9/11 “Bank Secrecy Act”. The act makes it illegal to deposit less than $10,000 if you have deposits totaling more than that. Never mind the fact that it’s your money, the feds can literally freeze and seize your account if you don’t deposit your money in accordance with the federal governments new rules.

In February of this year, the Sowers earned over $10,000 from their farmers market sales. When they went to deposit the money they learned they would be required to fill out paperwork at the bank. This paperwork would then be submitted to the federal government for review.

The Sowers decided it wasn’t worth the time and hassle and opted to roll some of their deposit over until the next month. After all it was their hard-earned money, why should the government be able to tell them how much they can or can’t deposit into their own account? The Feds had no warrant, no reason to suspect the Sowers were involved in terrorist activities and no reason to suspect that they were laundering money. But thanks to the “Bank Secrecy Act” that was passed shortly after 9/11, none of that seems to matter. In fact, it seems the Feds can do just about anything they want with your money.

According to the ACT:
A bank must file a Currency Transaction Report for each transaction in currency (deposit, withdrawal, exchange, or other payment or transfer) of more than $10,000 by, through, or to the bank. Multiple currency transactions totaling more than $10,000 during any one business day are treated as a single transaction if the bank has knowledge that they are by or on behalf of the same person.

After the Sowers visit to their bank, they were reported to the Federal Government who then seized their bank account of $70,000.  Although the Sower family legitimately earned every cent in that account, committed no real crime, and in my opinion was just trying to maintain their privacy, the Department of Justice in now in the process of suing to keep $63,000 of family’s money.

Both Randy and Karen Sowers told The Frederick News-Post that they have done nothing wrong and had never heard of this structuring law until Treasury Department showed up at their farm to question them about deposits.

They told the local paper,

“The level we deposited was what it was and it was about the same every week,” Randy Sowers said. ” “We deposited money in the bank. That’s what we did,” he said. “That’s all there is to say.”

Without funds to operate, the family might not be able to do business this year. The government has yet again destroyed another small family farm, making the large corporate mega-farms that much more powerful. But maybe that’s exactly what they want. After all, this never would have happened to those large corporate owned farms. Those farms are Exempt.….

According to the Bank Secrecy Act Anti-Money Laundering Examination Manual

So once again, small business owners become the target of persecution while large corporate entities seem to fly right under the radar. Apparently the feds feel that corporations are above the law and would never engage in illegal activities.