Early one Saturday morning, 70-year old retired Air Force reservist and former state employee Joe Del Rio was awoken by a knock on his front door. It was the city of Austin’s local code enforcement team. One of the agents told Mr. Del Rio that he needed to speak to him right away.

After getting dressed Mr. Del Rio went and opened his front door. He was immediately bum rushed by the Austin Police Department’s SWAT Team and then detained and interrogated for over 10 hours.

What was this 70-year old mans crime?

It seems that the Mr. Del Rio had an underground bunker, and apparently in Austin, Texas that enough to have the SWAT team storm your home and hold you at gun point.

The bunker in question was previously built as a bomb shelter during the cold war. Mr Del Rio had recently renovated part of the old fall out shelter and had been using it as a makeshift workshop. 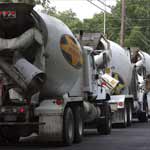 After his ordeal of being detained at gun point, Mr. Del Rio’s problems were far from over. First, the city fenced off his home and prohibited him from entering the residence. They then brought in contractors and completely filled in his entire basement and bunker with 264 tons of concrete.

To add insult to injury the city then sent Mr. Del Rio a bill for $90,000 in repairs, that they say were critical to make his home safe. Shortly later the City seized his property without a penny of compensation. Mr. Del Rio is now in the process of trying to sue the city for what he says is an unconstitutional seizure of his property.

“The ordeal they put me through was unnecessary,” Del Rio, now 72, said the afternoon before the second anniversary of his forced eviction. “I’ve gotten the runaround. I think they want the property. Condemning it is a cheap way to get it.”