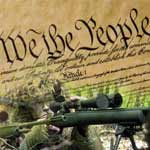 The Fifth Amendment of the US Constitution says that Americans are never to be deprived of life, liberty, or property without due process of law. But some think that this shouldn’t apply to certain people.

In fact, according to anonymous Obama administration officials, they can now approve the killing of American citizens through a secret government committee, not subject to congressional oversight or judicial review. The news was reported last week by Reuters who found out recommendations for this new secret kill list are drawn up by a committee of mid-level National Security Council and agency officials.

After the White House ordered killing of two terrorists, who were American citizens, Ron Paul, and many other Americans, are starting to wonder who’s on the Governments secret Kill list, and what’s the criteria that puts someone on this list?

And another interesting opinion from Michael Savage….