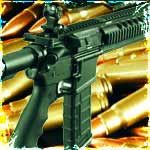 Anytime you start talking about a coming bans on firearms, people come out of the woodwork to tell you how crazy you are and how that could never happen in America. Well if you watched last night’s presidential debate, it should be painfully obvious that this is no conspiracy theory. Come election time, gun owners are going to be under attack from new federal legislation that will severely limit what you can and can’t purchase.

Anyone who believes in the right to bear arms, needs to start paying serious attention to what’s going on. In a very telling sign of what’s to come, both candidates seemed to indicate that the so-called “assault weapons ban” could be again rearing its ugly head.

While Romney didn’t say that he would outright introduce the ban nationally, he did admit that he supported a ban on these firearms while Governor of Massachusetts. On the other hand, President Barack Obama admitted that during a second term his agenda would include, reintroducing a ban on what he calls, “assault weapons”. This legislation would ban firearms like, AR15’s, AK47’s and numerous other rifles and shotguns.

In the debate Obama said:

…”What I’m trying to do is to get a broader conversation about how do we reduce the violence generally. Part of it is seeing if we can get an assault weapons ban reintroduced.”

As we’ve pointed our numerous times in the past, we have two of the most anti-gun presidential candidates in history running for office. While one candidate, President Obama, has now come out and telegraphed his intentions for the world to hear; the other candidate also has a pretty shady gun record that we must be aware of.

When Governor of Massachusetts, Mitt Romney passed the nation’s first ban on so-called “assault weapons” and then increased fees on Massachusetts gun owners by over 400%. While campaigning for the Senate in 1994, Romney said he favored strong gun control laws, pushed for a five-day waiting period for gun purchases, and joked that his positions did not “line up with the NRA.”

As we said in the previous article on this topic, when election time rolls around, gun owners are going to have a lot to watch out for.