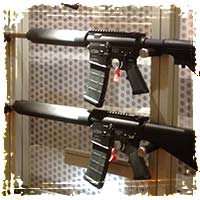 Six firearms manufacturers have joined together in an effort to protest New York’s unconstitutional firearms laws. Barrett Firearms, LaRue Tactical, Olympic Arms, Extreme Firepower Inc, Templar Custom and York Arms have all stopped selling firearms to all New York law enforcement and government agencies. A number of them are also starting to call for an industry wide boycott on any state who bans civilian ownership.

The boycott is in response to New York’s latest efforts to strip the American public’s 2nd amendment rights.

President of Olympic Firearms put out the following statement:

Legislation recently passed in the State of New York outlaws the AR15 and many other firearms, and will make it illegal for the good and free citizens of New York to own a large selection of legal and safe firearms and magazines. We feel as though the passage of this legislation exceeds the authority granted to the government of New York by its citizens, and violates the Constitution of the United States

Olympic Arms invites all firearms manufacturers, distributors and firearms dealers to join us in this action to refuse to do business with the State of New York. We must stand together, or we shall surely fall divided.

LaRue Tactical put out a press release that read:

Effective today, in an effort to see that no legal mistakes are made by LaRue Tactical and/or its employees, we will apply all current State and Local Laws (as applied to civilians) to state and local law enforcement / government agencies.

In other words, LaRue Tactical will limit all sales to what law-abiding citizens residing in their districts can purchase or possess.

The recent boycott seems to have been inspired by Ronnie Barrett, owner and CEO of Barrett Firearms Manufacturing. Barrett Firearms, the company that manufacturers the most popular .50-caliber weapons in the world, refuses to sell firearms to any state that bans the civilian ownership of their firearms.

Barrett was one of the first to put the 2nd amendment above profits when he stopped selling to California Law Enforcement, after lawmakers banned civilian ownership of his high-caliber rifles.

At the time he wrote:

“It’s hard to believe we live in such a dark time that someone has actually banned a single shot rifle. But as you will see, this is the cleverest of all gun bans, and the end goal is civilian disarmament, the confiscation of your tools of liberty, your rifles…” He goes on to say, “Barrett cannot legally sell any of its products to lawbreakers. Therefore, since California’s passing of AB50, the state is not in compliance with the US Constitution’s 2nd and 14th Amendments, and we will not sell nor service any of our products to any government agency of the State of California.

While many of these companies will no doubt lose some revenue, it’s good to see them finally standing up to the law makers who are trying to take away our right to keep and bear arms. If companies like Glock, Smith & Wesson and SIG Sauer join the fight, we may actually see some of these States start to back off.

Only time will tell whether these larger companies will put the second amendment above profits; they have the power to help, and they should let state and federal authorities know that if citizens can’t buy them, the government shouldn’t be allowed to either.