According to an analysis by WND, Chicagoans are at a greater risk of being murdered than soldiers in the middle of Afghanistan. Over the past ten years, more people have been murdered on the streets of Chicago than the number of American forces that have died in Afghanistan.

In a city that makes it impossible for law-abiding citizens to own a gun, the death toll from those murdered with a gun is almost beyond belief. In fact, it’s not unheard of for the city to routinely see over 50 shooting in a single weekend.

According to the WND review, from 2003 to 2011, 4,265 people were murdered in Chicago; compare that with the 2,166 military members who been have killed since Oct. 7, 2001 in Afghanistan, and you really have to ask yourself how anyone could think these gun control laws are working. 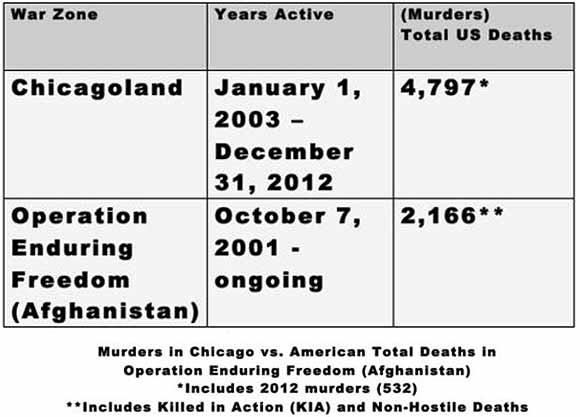 Assault Weapon Ban would do Nothing to Stop the Killings

When you look at the current assault weapons ban legislation that is being proposed by the Senate, you quickly realize how little this legislation would do to curb the violence. According to the numbers compiled by the Chicago police department, which line up with the national numbers, less than 1 percent of the murders in the last ten years were committed by the semi-automatic rifles that the AWB bill goes after.

Despite what the idiots in Washington would like the public to believe; guns save innocent people’s lives. I know this is an inconvenient truth for the morons who keep pushing their gun control agenda, but there’s an overwhelming amount of evidence to support these facts.