Late last night a man dressed as the Joker went into a midnight showing of the movie Batman and opened fire on the crowd. The gunman reportedly entered a Century 16 theater in Aurora Colorado, only minutes from where the Columbine shooting happened, and shot over 70 people in the theater.

Within moments of the horrific shooting, Anti-Gun groups and politicians pounced on the opportunity to use the tragedy to push for gun control.

Are Guns Really the Problem?

Think about it, why are these types of events becoming so common in America? If the problem was simply limiting access to guns, cities like Chicago and New York would be utopias filled with peace and love.

Maybe the problem has a little more to do with our current culture of violence and immortality.

While I don’t usually buy into the whole video games and movies lead to violence line of thinking, I do think it’s something that needs to be at least talked about. I mean if the idiots in the media are going to use this tragedy to blame guns, shouldn’t they at least mention the extreme violence in the movie that was playing during the tragedy? 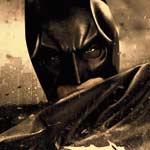 The Dark Knight, the movie that was playing during the shooting, is filled with disgusting examples of how Hollywood celebrates violence and debauchery. The movie includes scenes like a man’s face being filleted by a knife, another man’s face being burned off and someones eye being slammed into a pencil. Worse yet, this movie is being directly marketed to our kids!

Instead of focusing on how evil guns are, maybe the idiots in the media need to start asking why America is so prone to violence.

As we have pointed out numerous times in the past – take the epidemic level of shootings in Chicago as a good example – guns aren’t the problem, our sick culture seems to be the problem. Until the problems with our culture is addressed, this problem will continue to happen.