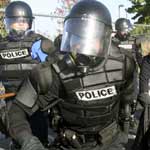 Over the last year we have detailed many examples of how preppers are being targeted and demonized by this administration as potential terrorists.

From the FBI demanding military Surplus stores spy on and keep records of those who purchase bulk goods, to Rand Paul warning preppers that the government considers them to be a target of the new military detention bill, things are certainly getting scary out there for people who want to be prepared.

Well today, the administration has turned the heat up on preppers and Americans again….

The plan is already in full swing and is even being promoted by liberal media outlets like NPR.

In a recent NPR article the new White House program is outlined as using a combination of local partners — schools, community boards and leaders — with both local and federal law enforcement and other agencies to keep tabs on the public. Many of these new partners, like the Department of Education, have never participated in national security issues before.

“We had a long conversation about what kinds of things education can do,” said Quintan Wiktorowicz, a senior director of the National Security Council at the White House, who spearheaded the initiative. “In the same way they fight gangs, or bullying, they can help here. The challenge is going to be trying to put the violent extremism initiatives into existing programs. But there are lots of ways to do it, and we’ll work with the schools to tailor the approach to what they need.”

And in another article from Oathkeepers we have also learned that The Nashville Tennessee Department of Health is in the process of performing “door-to-door assessments” on people’s disaster preparedness levels. These assessments are being conducted with tools designed by the Centers for Disease Control and Prevention that will track people’s levels of preparedness, health status, and basic needs of the community.

The program is taking place in 30 randomly selected neighborhoods throughout Davidson County, Tennessee.

School Children asked to document what food they have in their houses:

We were also sent a notice from a mom in Knoxville Tennessee who was very troubled by a school project that required her children to:

She sent us this image from the schools website but asked that we block out her information….