Is the Internet Really Free? 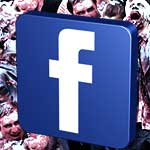 For years we’ve been sold the lie that the internet was the last great refuge for the freedom of speech. We are told time and time again how the internet has helped small business and independent media sites compete with the large corporations of the world.

But is that really true anymore? Was it ever true?

What most people fail to realize, is these corporate powers have rigged the system. The whole thing is complete bullshit!  99.9% of people who use the internet use one of three search engines to find their information. They primarily use one social network to communicate with their friends and family, and most of the video and news consumed online is done so through YouTube.

Well then let me share with you a small example of how the system is becoming increasingly rigged against small independent news websites. In fact, I’ll share with you an example from my own site. 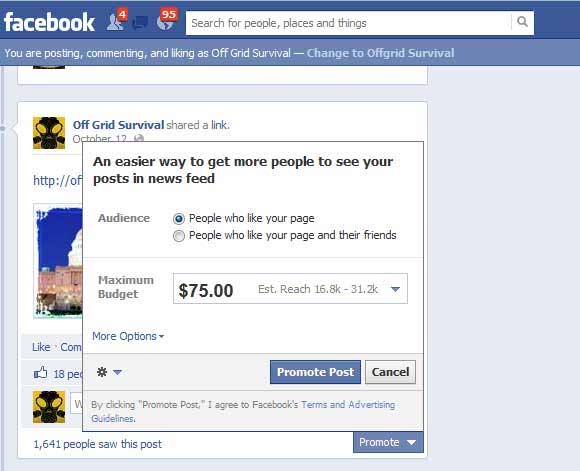 The picture above is what I have to spend in order to have my posts shared with my friends and followers on Facebook. You see, Facebook has a new policy that completely screws independent news companies, and small business owners.

Even though over 15,000 people have subscribed to receive our updates, via our facebook page, the corporate bigwigs over at Facebook have decided that you no longer get to choose which type of media you actually see. If I want my posts shared with the 15,000 people who specifically asked to receive that post through facebook, I will now have to pay over $75 per article. If more people subscribe, that price will go even higher.

Well, I can’t do that. I’m not selling products, I’m reporting on the news, and helping people become better prepared.

So Facebook has effectively censored my posts, along with hundreds of thousands of other small business people and independent media companies, in favor of promoting posts that can now only be purchased by major media companies and large corporations.

Yes, we still have our loyal readers who come directly to the site, but how long will that last?

With a growing number of companies following the Facebook model of Censorship, the internet will soon resemble the crap we see on T.V.  – A couple of large corporations deciding what we can and can’t see, what news we can and can’t hear about, and what product and services the drones should buy.

Fight back using their own technology against them. At first I though about leaving Facebook altogether, but then I realized I would be helping to perpetuate the problem. Sometimes the best way to fight the war is from within the enemy’s camp. While I refuse to share anything created by the corporate media; I will continue to share my posts (even if only a fraction of the people actually see them) I hope you’ll do the same.

While I am in no way against people making money, I would rather see small business owners  have the opportunity to compete. What’s most ironic about that statement is the fact that companies like Facebook are the ones out there talking about “greedy business owners” and supporting candidates who talk about the “evils of capitalism”, all the while screwing the small guy every chance they get.

Share and Promote independent media. The Corporate bigwigs have all the money in the world to promote their propaganda. The only way we can fight back is to start setting up our own networks and promoting each other. As part of this effort we list a number of survival websites and then promote it on ever page on this site. We will soon be setting up a section for independent news media. While technically some of these people may be our competitors; if we don’t stand together, pretty soon none of us will have a voice.

While I may not agree with everything that’s said on some of these sites, at least the opinions expressed are not scrubbed through mass media filters.

Break out of the Matrix. Although I still think we should use some of these systems to spread other independent viewpoints – especially to those who haven’t woken up – it’s time to start networking outside the system.

In fact, if you have a unique point of view or think you can help people who visit this site, please join the conversation.