More information is coming out today confirming that the Mass Shooting in San Bernardino was a carefully planned ISIS inspired terror attack. And in a press conference this afternoon, the FBI confirmed that this “was a terror attack,” and that they were now officially investigating the California mass shooting as an act of terrorism.

But even more disturbing than how they have lied to us for the past couple of days,  is how the terrorists got into the country, and how there may be thousands more just like them hiding in neighborhoods throughout the United States.

This morning, information came out tying the San Bernardino shooters directly to the ISIS terror organization. The Muslim woman who carried out the horrific terror attack in San Bernardino on Wednesday had pledged allegiance to the Islamic State group and its leader on Facebook, according to a U.S. law enforcement official.

The law enforcement official said that evidence showed Tashfeen Malik made her posts under an alias, but deleted them in the days before she and husband Syed Farook killed 14 people, and wounded another 17.

Malik, a 27 year-old Pakistani who came into the U.S. on a K1 Visa, is thought to have recruited her husband Syed Farook online in 2014. Co-worker Patrick Baccari told the Los Angeles Times that Farook recently visited Saudi Arabia to meet a woman he met online. According to authorities, that woman was the second suspect, his wife Tashfeen Malik. 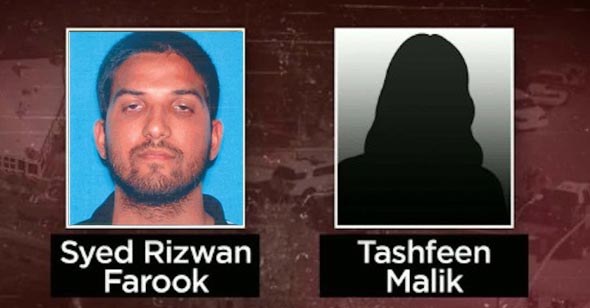 We would show you pictures of Malik, but apparently the media and the FBI are refusing to release her pictures because it might be offend Muslims to show her face without the Burka — that is why every news report you see shows her as a blacked out figure. I guess political correctness and not offending Muslims has now become more important than showing the American public who the enemy really is.

In the days leading up to the attacks, law enforcement officials are saying the Muslim couple started erasing their digital footprint; deleting email accounts, smashing cell phones and hard drives, scrubbing their social media pages, and trying to delete anything that tied them to the terrorist organization.

Despite the overwhelming amount of evidence, including proof that Farook was in contact with a number of international terrorists before the attack, The Obama administration is still refusing to call this a terror attack – instead, they are still trying to do everything they can to pin this one on American gun owners.

But information is starting to leak out today that shows the Obama administration might be more culpable in allowing these terrorists into the United States than they are letting on. 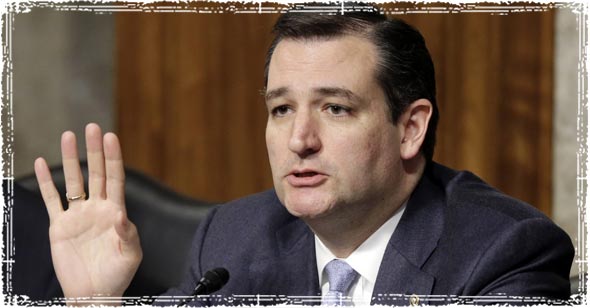 “We demand that you immediately provide the same detailed information requested in that letter for Farook and Malik, which would include the immigration history of their parents and any immigration documents related to their marriage and her subsequent travel to the U.S,” the senators wrote.

“We are dealing with an enemy that has shown it is not only capable of bypassing U.S. screening, but of recruiting and radicalizing Muslim migrants after their entry to the United States,” the two wrote to the secretaries of state and homeland security as well as the attorney general.

“The recruitment of terrorists in the U.S. is not limited to adult migrants, but to their young children and to their U.S.-born children—which is why family immigration history is necessary to understand the nature of the threat,” they wrote.

“Farook is the child of immigrants who came to the United States from Pakistan, and Malik [his wife, a native of Pakistan] travelled to the U.S. from Saudi Arabia,” according to the letter.

The Senators claim that at least 12 people with ties to terrorists have entered the United States in the first eleven months of 2015 through the Obama administration Refugee program.

Earlier this year, FBI director James B. Comey confirmed that they had evidence that ISIS had already infiltrated every state in the country. In fact, he claimed there were already thousands of Islamic State supporters inside the United States.

Obama administration vowing to go after those who speak against Islam

Instead of taking the threat seriously, and going out and finding the thousands of terrorists who the FBI claims have already made it into the country, the Obama administration is instead threatening those who speak out against Islam. 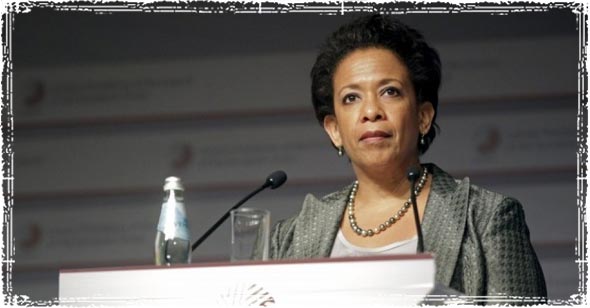 Assuring the pro-Muslim group that “we stand with you,” Lynch said she would use her Justice Department to protect Muslims from “violence” and discrimination.

Earlier this year, the Obama Justice Department claimed the threat of Radical Islam paled in comparison to homegrown extremists – specifically white anti-government types, and right-wing extremists. They even created new a new national security position tasked with focusing on these types of extremists inside the United States.

How about protecting the American public from the flood of Islamic Radicals who are telling you they are coming here to attack us?

But instead of protecting us from Islamic Radicals, this administration continues to attack law abiding citizens and continues to threaten us with more gun control executive orders that will do nothing to stop terrorists from attacking us. In fact, all these laws do is make innocent American sitting ducks for the wackos of the world.

Gun Violence Declining Everywhere in U.S., Except in Gun-Free Zones

While the Obama administration would like you to believe that the evil NRA is causing these mass shootings, according to the actual data, it’s Obama’s gun-free zone policies and anti-gun executive orders that are causing the problems.

Over the last 20 years, while we have seen a massive increase in privately owned firearms, actual gun crimes have plummeted to record lows in this country; expect in these high-profile shootings and terrorist attacks in gun-free zones. Those types of shootings are actually on the rise.

Since 1950, all but two of this country’s mass shootings have taken place in gun-free zones. These gun-free zones are making Americans into targets, and the terrorists know it.