In American you are supposed to have the right to go about your business without the government looking into your every action.

The right of the people to be secure in their persons, houses, papers, and effects, against unreasonable searches and seizures, shall not be violated, and no Warrants shall issue, but upon probable cause, supported by Oath or affirmation, and particularly describing the place to be searched, and the persons or things to be seized. 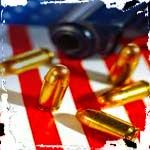 These days, more and more Americans are finding themselves subject to investigation by law enforcement agencies, for actions that in no way resemble any sort of crime. Some are even being locked up for speaking out!

Where does it stop, and are you next?

Brian Loftus, a commercial fisherman and Oathkeeper, went to a local gun store to purchase a few boxes of ammunition for the range. Later that evening he got a phone call from the State Police. They wanted to talk to him because of his “large purchase amount of ammunition.”

Loftus, told the State Police that he had no criminal record and no reason to be suspected of anything. The police responded by telling him that they “know his record was clean”, because they had already pulled it and checked him out prior to the call.

I guess they forgot about that pesky 4th Amendment.