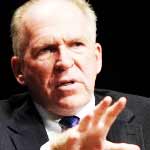 Without due process or even being formally accused of terrorist involvement, John Brennan will now become the Lead White House jury and executioner of whoever they deem to be an enemy target. His role also puts him in charge of establishing new military and CIA procedures for the assassination of enemy targets.

This news has a number of people very worried, especially when you consider this is the same government who has been trying to make a legal case for killing American Citizens overseas.

A couple of months back Attorney General Eric Holder suggested in a speech, that the President of the United States has the power to kill anyone outside the United States he feels might be dangerous. When FBI Director Robert Mueller was asked by congress if this policy extended to citizens living in the United States, he was unable to answer the question. In fact he said just that, when pressed he told congress that “he was not certain” if the government had the right to kill our own people.

What’s even more frightening is who the government considers to be potential terrorists.

Last year we ran an article where Rand Paul warned, “Someone who has guns, someone who has ammunition that is whether proofed, or even someone who has 7 days of food in their house” can be considered a potential terrorist by the federal government. Sounds an awful lot like preppers to me.