UC Berkley is on lock down after left-wing terrorists started fires,  attacked innocent people, and attempted to take over the campus to stop Journalist Milo Yiannopoulos from speaking at UC Berkley. 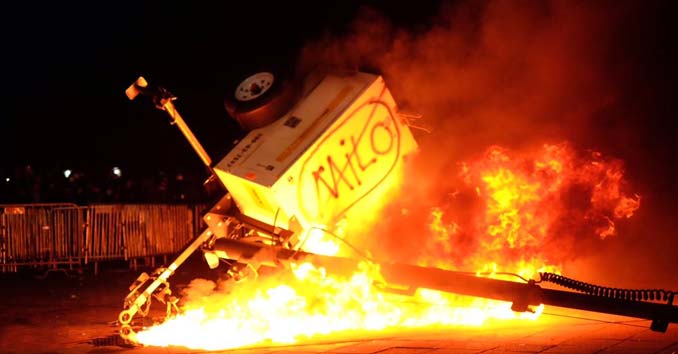 Campus police have issued a shelter-in-place warning, and Breitbart editor Milo Yiannopoulos has been evacuated after left-wing terrorists attempted to storm the building where he was set to speak.

This is what greets Milo at UC Berkeley. pic.twitter.com/dTILMMgySY

Antifa are out of control attacking people and setting off fires. pic.twitter.com/3s3swrYSzf

They are just stopping random cars, smashing in their windshields, and pepper spraying the drivers. pic.twitter.com/yAGtJxcoZH

Literally beating people in the streets with bats. The University, town, and police force allowed this to happen. pic.twitter.com/E62GW0EsPu

The Breitbart editor posted on Facebook that he and his team were safe after being forced to evacuate from campus.

The ironic thing about tonight’s riots, is here you have a bunch of people rioting in the name of “tolerance;” people who are out there claiming to support gay rights and immigrant rights.

Well, Journalist Milo Yiannopoulos is an openly GAY IMMIGRANT! But apparently, he doesn’t fit the image of what the left thinks gays and immigrants should be.

His visit to Berkeley was sponsored by the campus Republican club, and Milo is a Donald Trump supporter. So because the gay immigrant supported Donald Trump, these so-called tolerant people are absolutely losing their minds.

Police barricades being disassembled and windows broken at Milo at Berkeley pic.twitter.com/D5lWmI38Sw

This was the fire a couple minutes ago. It just let out a huge bang. PD telling people to get back as FDT plays in background. @NBCBayArea pic.twitter.com/f6RPv0XF7i

My friend was giving an interview when some coward peppersprayed her #Berkeley pic.twitter.com/CDpEqDsw2A

They are surrounding people and beating them with Antifa flags and poles. pic.twitter.com/v3o1kEpwFj

From powering flashlights, emergency radios, and GPS devices to providing emergency backup power to your home during a disaster, these are some of the top emergency power options on the market. […]