The New Black Panthers party and members of The Black Live Matters movement are clashing with police throughout the country, in some cases violently attacking, ambushing and shooting police. While the mainstream media is refusing to cover what’s really happening, instead pretending these are peaceful protests, we are not going to tiptoe around what’s really going on here.

Radical Hate groups are threatening to spread civil unrest, chaos, and killings across the country in some sick and twisted perversion of the civil rights movement. Keep in mind, this has nothing to do with civil rights, as most of these groups are being financed by rich White liberals like George Soros and other socialist groups. In my opinion, this is all part of the federal government’s plan to nationalize the police force that was put in place shortly after Ferguson. These groups don’t care about all lives, they simply want to spread their radical ideologies and create chaos.

This is A Preparedness Issue: You need to take it seriously!

Since the Massacre in Dallas, where a member of a radical hate group gunned down 12 police officers, there have been a number of massive demonstrations that the media is refusing to cover. Last night in Baton Rouge, members of the New Socialist Party combined with the Black Panthers and the Black Live Matter Movement to shut down a major interstate highway in Minneapolis, Minnesota.

Anyone who is serious about preparedness needs to take a good look at what happened last night, because it is exactly what I’ve been warning about for years, and is a perfect example of why I tell people they need to have a solid bug out plan that includes multiple routes out. If these people can close a major highway system in seconds, what do you think is going to happen when this movement of violence and chaos spreads?

For over four hours Interstate 94, west of downtown St. Paul, was completely shut down by violent protesters who chucked Molotov cocktails, fireworks, rocks, and chunks of rebar at police. 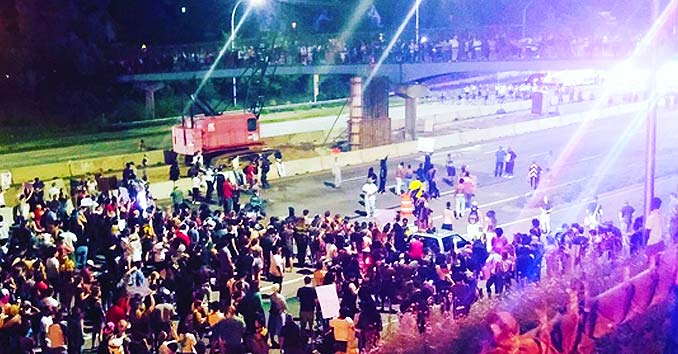 More images of the protest that closed I-94 in St. Paul #PhilandoCastile #I94closed pic.twitter.com/2MkNwByhOK

This is Happening Throughout the Country; but the mainstream media pretends these are all peaceful protests.

This isn’t an isolated incited. This is happening throughout the country and will continue to happen because we don’t have anyone who is willing to admit there is a problem brewing.

In Chicago city streets were shut down for hours:

In New York, a number of major streets, highways and Tunnels were shut down. Here they are shutting down the Tunnel on FDR Drive.

Protesters are shutting down Airline Highway in front of the Baton Rouge police department pic.twitter.com/nNXa2Isjr4

And for those who still aren’t convinced of the need to have a solid evacuation plan with multiple routes out. Here is a video from two nights ago in Oakland, where these groups shut down the 880 highway system for over 5 hours.

These are not just peaceful groups

As we exposed yesterday in our preparedness alert, these are not peaceful groups. In fact, these groups are trying to unite street gangs from around the country to form an urban army bent on spreading chaos and violence.

In a series of posts on Facebook, the African American Defense League — a hate group afflicted with Black Lives Matter and the New Black Panthers Party — called on these gangs to unite. They wrote, “It’s time for Crips and Bloods to start shedding blood, and called for them to start attacking police. In another post, they called for these gangs to also go after firemen and “racist crackas”. 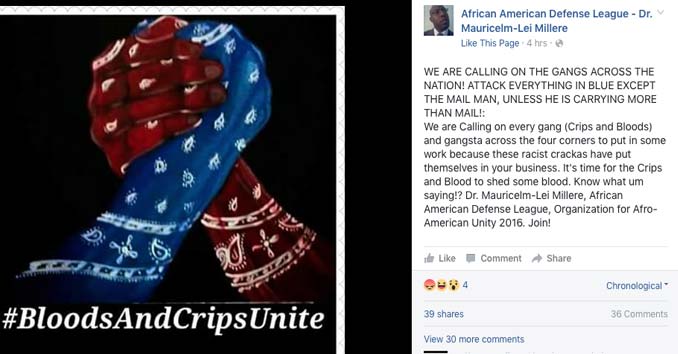 Protest Leader calls for The Killing of Cops: You won’t see this video on the mainstream news!

Police Being Ambushed Across the Country

You won’t hear this on FOX, CNN or MSNBC, but since the massacre in Dallas violent street gangs have begun ruthlessly targeting and ambushing police.

What You Can Do to Prepare

In my book, The Ultimate Situational Survival Guide: Self-Reliance Strategies for a Dangerous World, one of the things I wrote about was situational awareness and knowing how these criminal groups operate. Once you hear that things are starting to get bad in your area, you need to know how to find out what’s going on.

Many of these groups use social media platforms like Facebook and Twitter to organize. These are not spontaneous protests; they are planned for weeks, sometimes months in advance. The media would like you to believe it’s about a random police shooting, it’s not. A lot of these people are professionally paid protestors flown into these areas to create chaos.

If you want to get a good look at what these people are saying and the violent rhetoric they are spewing look at the #Fuck12 Hashtag they use on Facebook and Twitter. It will also give you a good idea of what other hashtags they are using so you can get situational intelligence during these events. That way should something bad happen, you will at least have some clue to what is going on because the media and your government are not going to tell you!

Have a Communication Plan: Emergency Communication is an extremely important part of any good preparedness plan. It’s something you cannot afford to overlook.