Over the weekend 16 people were hospitalized in a mass shooting in New Orleans. While mass shootings usually receive almost instant 24/7 coverage from the mainstream media, followed by Democrat lawmakers demanding more gun control laws, this shooting received very little attention and not a single remark from the White House.

So what was different about this shooting?

Well, just like the over 500+ people who are murdered in the streets of Chicago every year, this shooting didn’t quite fit the media narrative of blaming evil NRA gun owners. Just like the under reported Chicago shootings, this mass shooting involved a bunch of criminal thugs who are apparently exempt from the Obama administration’s wrath. 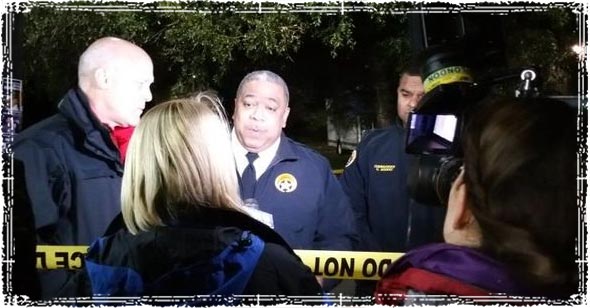 The shooting broke out late Sunday at Bunny Friend Park in the Upper Ninth Ward of New Orleans where at least 500 people were gathered to shoot a rap video. Police spokesman Tyler Gamble told the Associated Press that the video was being made without a permit to use the park. He added that police were on their way to break up the crowd when the shooting took place.

Shooting at New Orleans music video shoot when two groups in the crowd opened fire on each other, wounding 16 people pic.twitter.com/jQxqFh2rbd

Terrorist’s already among us…

Sadly these types of incidents are growing in regularity throughout the country; unfortunately, they are rarely covered because they happen in democrat controlled areas of the country with some of the toughest gun control laws on the book. It seems highlighting the epidemic level of black on black crime and gang violence isn’t a story the media wants to touch. After all, pointing out the epidemic level of gun violence in areas that pretty much ban guns might highlight how ineffective these laws really are.

So while the media spends hours upon hours covering things like the ISIS threat – which, I do believe is a very real threat to the country – we already have 1.4 million terrorists in this country who are completely ignored by the mainstream media.

According to the latest FBI statistics, 33,000 violent street gangs, violent motorcycle gangs, and prison gangs with about 1.4 million members are criminally active in the U.S. today. This country’s gang problem is out of control, and a much larger threat to our safety than the threat posed by Islamic extremism.

Every year thousands of people are gunned down by violent street gangs, hundreds of thousands are assaulted and robbed, and billions of dollars of illegal drugs are pumped into this country through these organizations. According to the FBI, gangs are responsible for an average of 48 percent of violent crime in the country, and up to 90 percent in some urban areas.

Why should we care about what these gangs are doing?

Because what’s happening in New Orleans and Chicago has been spilling over into suburban and rural areas of the country for years now. The riots we witnessed earlier this year in New York, Ferguson, and Baltimore are all symptoms of a larger problem – a problem that is spreading like a cancer throughout the country.

The shootings in New Orleans highlight a very real problem in this country; epidemic levels of gang related violence that is being ignored by the mainstream media, politicians, law enforcement, and the federal government.

If you have kids in Public School they are being exposed to these Gangs.

According to the FBI, Drugs and weapons offenses are the most common crimes gangs commit on school property.

A study released by the National Center on Addiction and Substance Abuse reported that 45 percent of high school students have gangs or gang members on their campuses. And according to a study by the Office of Juvenile Justice and Delinquency Prevention 35 percent of middle-school students report gangs presence in their schools. I can tell you from my own experience; those numbers are probably massively underestimated.

The truth is there are far more violent crimes and school shootings in this country than what we are being told. The reason you don’t hear about them is because they are usually gang related, and the stories are often ignored by the media or covered up by the school system.

During the last week there have been at least three school shootings that the media and the Obama administration has all but ignored. I believe they were ignored because they were all gang related, and didn’t fit the narrative the media is trying to push. Why else would the national media ignore these shootings, while devoting 24/7 coverage to every shooting that happens in a rural or suburban area?